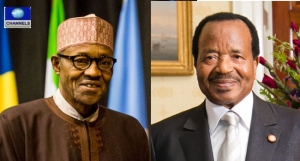 Nigeria and Cameroon on Wednesday agreed to strengthen Border patrol and open communication among Border States to make more information available to both nations, as they tackle the Boko Haram Terrorists in Nigeria’s north-east region and northern Cameroon.

The agreement was reached at a meeting between the Nigerian President, Mr Muhammadu Buharia and his Cameroonian counterpart, Mr Paul Biya in Yaounde, the Capital of Cameroon.

President Buhari arrived at Yaounde at about 11:00 local time and held talks with the Mr Biya, with both leaders seeking ways of strengthening the counter-terrorism operations in their common border.

On arrival, President Buhari was welcomed by the 82-year-old Cameroonian President at the airport in Yaounde.

The Special Adviser to President Buhari on Media, Mr Femi Adeshina, told Channels Television, that both leaders met and agreed that there was the need to strengthen the countries’ borders and contribute troops for the Multi-National Joint Task Force, expected to begin operations next month.

Six Nigerian governors, also met with five of their counterparts in Cameroon, where they agreed to open communication among Border States, build more infrastructure to secure the borders, operate common border patrols and share intelligence and surveillance.

President Buhari is on a two-day visit to Cameroon for talks with the officials of the Cameroonian government, aimed at deepening cooperation between both countries in the counter-terrorism operations.

He will also meet with Nigerians in Cameroon before he ends his visit.