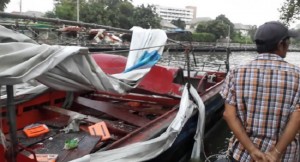 At least 58 people have been injured in Thailand’s capital, Bangkok, after the engine on a water taxi exploded as it pulled into a jetty.

Police said that most of the injured suffered from minor burns, though two passengers were said to have been seriously hurt by flying debris.

Initial reports suggested that a fuel leak was to blame.

Water taxis ply the canals around Bangkok and are a popular form of transport in the traffic-choked city.

Statistics from 2012 revealed that more than 100,000 people use the canal boats in Bangkok every day.

The Erawan Medical Emergency Centre said two Myanmar nationals and one Japanese national were among those injured.

The boat ran on both diesel and liquefied natural gas, Khao Sod reported.

The firm that runs the service is using only diesel on its boats. Investigation into the cause of the accident is ongoing.

Coronavirus: UK To Repatriate Citizens From Ship Quarantined Off Japan

Netanyahu’s Trial To Begin In March

I Wonder How Boko Haram Survived Up Till This Time – Buhari