Economic Recession Will Be Short-lived – Osinbajo 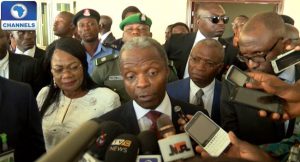 Nigeria’s Vice President, Professor Yemi Osinbajo, is optimistic that the economic recession the country is battling with would be short-lived.

He said changes would come ‘once the Federal Government is able to resolve the issues concerning the pipeline vandalism and focus on sustainable diversification policy’.

The Vice President gave this assurance while speaking to reporters at the Redeemers University in Ede, Osun State. It came days after the National Bureau of Statistics gave figures that showed the nation’s economy had glided into recession.

Professor Osinbajo said that the loss of about 60 per cent of gas and 60 per cent of revenue were largely responsible for the economic challenges Nigerians have been facing.


The Vice President dismissed predictions that the recession would last till year 2020 and assured Nigerians that the Federal Government would not rest on its oars.

He said that efforts were on to partner with private investors to invest more in the renovation of the refineries.

While commending Nigerians for their resilience, Professor Osinbajo expressed hope and conviction that “Nigeria has all that it takes to bounce back” so long as the nation keeps a steady course.

It is the second time within a week that the Vice President is giving this assurance of better days to come.

He had told a delegation of the Northern States Pentecostal Bishops Forum in his office in Abuja, the nation’s capital on Tuesday that economic recession was as a result of stealing of the nation’s funds that had occurred during the rule of previous administrations.

Professor Osinbajo said: “There is no country in the world that can face the kind of stealing that has taken place in Nigeria without having to deal with the consequences, including the current state of the economy”.

“This country has been badly governed. We are dealing for instance with the embezzlement of funds to the tune of $15 billion in one sector alone,” he told the Bishops.

‘We Can’t Ignore It’

Many critics have asked the government to focus on the present and the future and stop blaming previous administrations, but Professor Osinbajo said his government would have to consider the past, as it had a lot to do with the current state of the economy.

“We have not turned attention to the oil and gas sector, where the former Central Bank of Nigeria’s Governor alleged that $20 billion was stolen. We must condemn and stand up against this level of corruption. It is the single most important reason of the current state of the country. We can’t ignore it,” stressed.

“We can’t say because they are Christians or Muslims we won’t condemn those involved in corruption. The country has been systematically destroyed.

“Our currency depreciated because we don’t have the reserves to back it. At the height of the oil boom, there were no savings,” he pointed out.