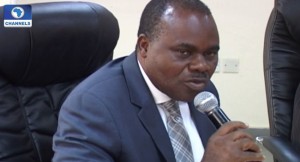 The National Human Rights Commission (NHRC) says it will not hesitate to issue an interim order to halt the alleged illegal construction works at the command of the Naval Building and Construction Company Ltd., if the need arises after an on the spot assessment of the building site.

The Executive Secretary of the Commission, Professor Bem Angwe, gave the warning in Abuja Monday upon receiving an official petition from the Managing Director of Lexy Nigeria Limited, Prince Leye Adetipe.

In the petition, the alleged violators are listed as the Chief of Naval Staff, Vice Admiral Ibok-Ete Ibas and the Managing Director of Naval Building and Construction Company Limited, Commodore Abdul Adamu and staff of the Nigerian Navy.

The petitioner also alleged that the Navy violated their rights when they sacked them and engaged other building contractors and reneged on their joint venture agreement by refusing to declare the proceeds of the sale of the housing units and other developments, contrary to earlier signed agreement on May 19, 2015.

He also alleged that the Navy on February 19, 2016 beat up some of their staff and other persons lawfully engaged by his company and that his life was in danger, as some naval ratings allegedly trailed his car on one occasion.

In his prayers to the NHRC, Prince Adetipe demanded for 10 billion Naira damages.

He also urged the Commission to grant him an injunction restraining the alleged violators (listed above) from “tampering with me and members of the staff of the company and those legally engaged by my company at the site”.

Meanwhile, the Director Human Rights Monitoring, Mr Tony Ojukwu, has led a team of senior officials of the Commission for an “on the spot” assessment of the building site.

The inspection followed a directive by Professor Angwe, as a prelude to further investigations.