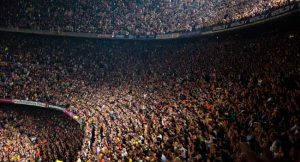 The Football Association has announced its agreement for a new six-season overseas broadcast rights deal for the FA Cup, starting from the 2018-19 season.

BBC says Pitch International would have coverage rights for Western Europe, Middle East and North Africa while IMG is expected to cover the rest of the world.

Both firms would commission deals to broadcasters while domestic rights would remain with the BBC and BT Sport.

The deal also includes rights for The FA Community Shield and The FA Youth Cup.

The FA Chief Executive, Martin Glenn, described the deal, which is reportedly worth one billion pounds, as “hugely significant”.

Glenn said it would allow more investment in pitches, facilities and participation programmes.

“It is not overstating it to say that it could have a transformational impact on what we are able to achieve across the country.

“It also underlines the global popularity of The Emirates FA Cup.

“With its history and tradition, it has the remarkable ability to create fantastic stories and inspire fans, players and clubs to believe anything is possible,” said the FA chief.

Airlines Need Up To $200 bn In Emergency Aid – IATA