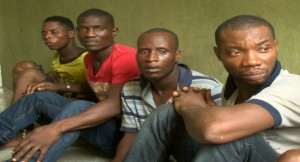 The Nigerian Security and Civil Defense Corps, (NSCDC), Ekiti state command, has paraded four suspected fake soldiers including a serving soldier, who all allegedly engage in terrorizing, molesting and extorting citizens of the state.

While the men were being paraded on Friday in Ado Ekiti, the state capital, Commandant of the Ekiti corps, Donatus Ikemefuna explained that “the suspects were apprehended by its intelligence unit after months of being on their trail.

Furthermore, he stated that ”one of the suspects, Oluyemi Olayemi, who is said to be a serving officer from Maiduguri but is currently on a study leave, supplies his cohorts military uniforms to carry out nefarious activities”.

The suspects, however, denied molesting or harassing anyone.

They are expected to be charged to court, including the self-acclaimed solider.