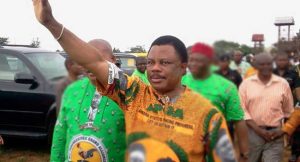 Anambra state Governor, Willie Obiano, has announced that the target of the ongoing ‘Operation Light up Anambra’ project of his administration, is to cover the whole stretch of the Enugu-Onitsha road, both on the old road and on the expressway by end of February.

Governor Obiano stated this when he commissioned 210 units of 180 Watts LED streetlight project, stretching from New Tyre, Nkpor, through New Parts and across the Flyover to Borromeo round about, Onitsha, covering five kilometers to be powered by Gas and through the National grid.

Also commissioned was the Nise to Agulu Lake street lights and the installation has presently covered a 90 kilometer stretch.

Addressing the people of the area that were present on the occasion, the governor, commended the state service commanders for a hitch-free Christmas and New Year celebration.

He then stated that the street lighting project has helped in security operations and that the target is to achieve mounting of street lights from the Awka to Asaba boundary.

Commissioner for Public Utilities, Mr Obi Nwankwo, then stated that benefiting communities must take ownership of the project and protect them from vandalism.

From Nkpor, the entourage moved over to Nise the commissioning point of the 15 kilometer street light, covering from Amawbia through Nise to Agulu Lake axis.

The governor then emphasized the status of Anambra state as the light of the nation, which the state must live up to.

The President General of Nise Community lauded the giant strides of the governor in lighting up the state and assured him of the community’s support to his administration.

Obiano on the other hand, reiterated his commitment towards improving in infrastructural development, insisting that the transformation of Anambra state in areas of infrastructure alongside economic and social security, is certain in year 2017,