We Cannot Be A Sinking Party, PDP Tells Defector 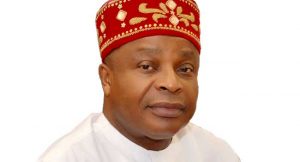 The Peoples Democratic Party (PDP) in Akwa Ibom State has condemned the defection of one of its members, Senator Nelson Effiong.

Mr Effiong, who presents Akwa Ibom South at the Senate, cited the PDP’s national leadership tussle as the reason for his defection.

He noted that “any politician worth his salt will not stay back in a party that is sinking like the PDP”.

The party, however, noted that the lawmaker’s actions and statements “are indicative of a drowning man, who in his speedy descent into an abyss, holds on to any straw within sight and seeks to take with him anything willing to follow”.

They maintained that the PDP “cannot be a sinking party”, adding that “even Nelson Effiong recognised so during the last enlarged stakeholders meeting of the party held in December 2016, where he spoke glowing about the party”.

In a statement tagged “Senator Nelson Effiong’s Ignoble Swan Song”, the state’s PDP Chairman, Obong Ekpo, directed the party’s legal department to commence the process of recovering the mandate given to Senator Effiong which they claimed was “manifestly mismanaged and corrupted by him”.

“We (the PDP) urge our party faithful, especially those from Akwa Ibom South Senatorial District, to remain calm and continue to support the party, knowing that we will do everything within the ambit of the law to reclaim the party’s mandate.

“We must continue to hold fast to our strength and convictions conscious that ‘the ultimate measure of a man is not where he stands in moments of comfort and convenience, but where he stands at times of challenge and controversy’ – Martin Luther King jnr.

“We are certain that this season of political trial will soon pass,” the PDP said.