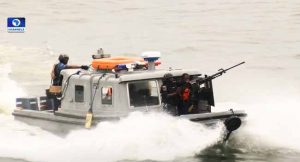 The Nigerian Navy has vowed to intensify its ‘Operation River Sweep’ in the Niger Delta, in order to rid the region of criminal elements within the maritime environment.

Garba said, ”The Operation River Sweep taking place in the region has been a success. The idea of introducing the ORS 1 and 2; one in the Eastern Naval Command and another in the Central Naval Command, is to keep pressure on the criminal elements within the maritime environment.

”Through this operation, the Nigerian Navy will be able to contain the nefarious activities of criminals in the area adequately.”

On sea piracy, the FOC said that apart from few isolated cases, the Navy and other sister security organisations had successfully minimised their criminal activities.

”Sea piracy has never been rampant. I will say we are doing our best to ensure that we keep the waterways safe for legitimate activities to take place,” he stated.

Declaring the medical exercise open at Okunbiri, Garba said the programme is part of the command’s corporate social responsibility to her host communities, which is the nineth edition.

He said the focus of the programme had been shifted to riverine communities and non-motorable villages who did not have access to good medical services.

The FOC called on the rural dwellers to reciprocate the Navy’s gesture by providing useful information that could help security operatives combat crimes, especially in the maritime domains.
Commenting on the gesture, an indigene of the community and former Acting Governor of Bayelsa State, Mr. Nestor Binabo, commended the Navy for its gesture.

He confessed that the free medical outreach was the first of its kind in the community, saying that the command came at the right time when many residents found it difficult to access medical care because of poverty.

The former acting governor commended the establishment of the command and the Navy as a whole.