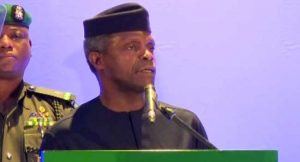 The Federal Government says N41bn has so far been spent on its Social Investment Programmes, with 25 million meals served under the school feeding programme.

The FG disclosed this in a statement issued by the spokesman to Acting President Yemi Osinbajo, Mr. Laolu Akande, on Tuesday.

The statement said a breakdown of the total number of meals served show that 1,051, 619 million primary school pupils are now being fed in 8,587 schools across Anambra, Ebonyi, Enugu, Ogun, Osun, Oyo, and Zamfara states.

It added that no less than 11,847 cooks have been employed to prepare the meals.

According to the statement, it is expected that later in the week, more meals will be served as Delta and Abia states are set to be paid under the school feeding scheme.

The statement added that Kaduna State had been repaid N3.4bn for its past expenses in implementing the food programme ahead of Federal Government’s roll-out.