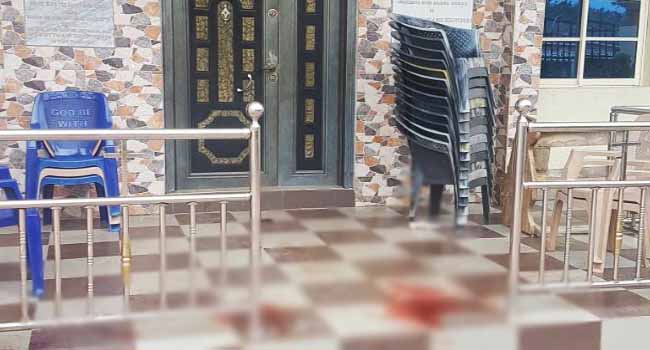 More Nigerians have come out to condemn the killing of about 12 persons in a church in Anambra State, southeast of Nigeria.

Nigerians took to twitter to express their sadness over the incident while some even reacted to the President, Muhammadu Buhari’s condolence message in which he assured citizens of their safety.

From all reports, ONE man entered a church in Ozubulu, Anambra and killed about a dozen people over personal issues, it wasn’t terrorists.

RIP to the Faithful Departed of Ozubulu😇

Pray for Ozubulu, Pray for Anambra, Pray for Nigeria, Pray for Unity, that it may be well with us🙏

The target of Sunday’s shooting at a Catholic Church in Ozubulu, Anambra State – Aloysuis Ikegwuonu a.k.a Bishop @Gidi_Traffic pic.twitter.com/KApTLrcnwG

Our prayers and thoughts to the people of Ozubulu in Anambra State Nigeria. Terrorism is the enemy of every Nigerian.

Heart felt condolence messages also came in from the Senate President, Bukola Saraki, Speaker of the House of Representatives, Yakubu Dogara, Former Minister of Education and Co-convener of the BBOG, Oby Ezekwesili, Governors of Benue, Rivers and Delta States.

I join all Nigerians in grieving today’s horrific massacre of innocent worshippers in St. Philip’s Catholic Church in Anambra State.

I grieves my soul to read about the inexplicable evil that happened today in Church in Ozubulu- our Anambra State. Ogini di ife nkaa?

My thoughts and prayers are with the victims of the church shooting in Anambra State. It’s imperative the perpetrators are brought to book.

You know a society has finally lost it when places of worship are no longer sanctuaries exempt from violence. #Anambra #BokoHaram

Our security forces must not stop until the perpetrators of today’s Anambra massacre are brought to justice. pic.twitter.com/zqord14pbx