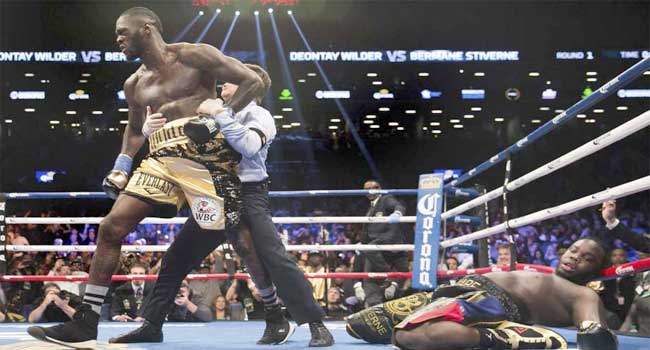 Undefeated champ Deontay Wilder destroyed Bermane Stiverne by knocking out the out-of-shape challenger with one second left in the opening round to retain his WBC heavyweight championship on Saturday.

The 32-year-old Wilder delivered an explosive performance as he floored Stiverne two times in the opening round before finishing him off with a punishing right-left to the head as the defenceless Canadian was pinned against the ropes.

Stiverne then slumped to the canvas and stayed motionless for some time before being helped up and into a chair where he was examined by the ring doctor at the Barclays Center arena in New York.

Wilder was the heavy favourite going into this the sixth defence of his heavyweight title.

It was his second win over the 39-year-old former champ Stiverne who came into the rematch 15 pounds heavier and having fought just once since losing the belt to Wilder in January 2015.

He won the first fight with a one-sided unanimous victory and the rematch was even easier.

On Saturday, he flattened Stiverne with 45 seconds left in the first round with a left followed by a straight right that landed flush on the face of the Haitian-born challenger.

Just 20 seconds later, he sent Stiverne back to the canvas with a heavy right hand that landed like a club to the side of the head.

By this time Wilder was having his way with Stiverne as he sealed the victory with a four-punch combination that sent Stiverne awkwardly back into the ropes as referee Arthur Mercante frantically tried to intervene and stop the onslaught.

The Canadian earned another crack at Wilder in September, taking the rematch on short notice after the scheduled challenger, Luis Ortiz, of Cuba, failed a doping test.

“So much frustration. Man …. it just seems like my career has been crazy. So many guys ducking me and so many guys using PEDs,” said Wilder.

Wilder was so confident that he would win again that he vowed to retire if he lost.

Stiverne blamed health issues for his failure to muster much resistance to Wilder’s onslaught in their first meeting but the beefy boxer’s his biggest mistake the second time around appeared to be spending too much time around the buffet table.

“It took a lot of courage to step in ring with someone like me. He was a clean fighter and he did the best he could,” Wilder said.