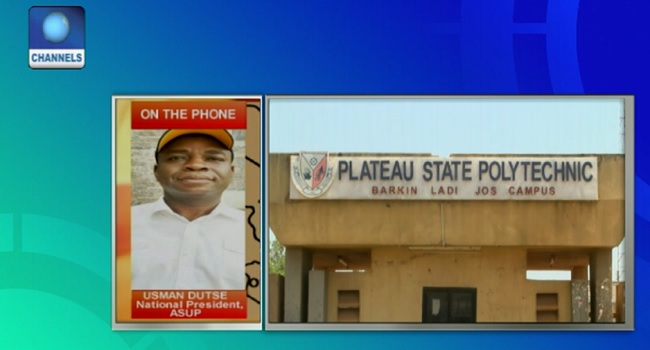 The President of the Academic Staff Union of Polytechnics, Mr Usman Dutse on Tuesday accused the Federal Government of lacking the commitment and political will in addressing issues affecting the nation’s Education sector.

He made this known during a telephone interview on Channels Television’s Sunrise Daily.

Mr Dutse’s comments come barely 24 hours after the union embarked on an indefinite strike following the grievances it has with the FG.

“Our major problem in Nigeria is not the issue of the solution to the problem. The major problem is the commitment and the political will to address some of these issues,” he said while lamenting the govt’s attitude in dealing with issues.

The ASUP leader advised the government to visit the national archive for some solutions confronting the ministry.

He added, “There are series of results and reports that are in the archive of govt of which if they use and implement them effectively, there will be significant solutions to our problems in Nigeria.

“This retreat is not the first of its kind; there have been series of retreats, conferences and workshop on how to address the problems of education in Nigeria.”

The union boss had while regretting the industrial action it had embarked upon criticised the FG for failing to keep up with the agreement reached last year.

Although Dutse admitted that the Minister of Labour, Mr Chris Ngige held a meeting with his people earlier, he, however, berated Ngige for not keeping to his promises.

“The Minister of Labour mediated and called for a meeting with the union. At the end of the meeting, we resolved that a Memorandum of Action (MoA) is going to be signed between the union and the govt.

“They promised to provide this memo the next 24 hours after the meeting, of which we waited after a week for the MoA to be released, it wasn’t released. That made our members lose confidence in the govt that if they could not provide MoA within the time they promised, then how sure are we that the agreement reached will be fully implemented,” he questioned.