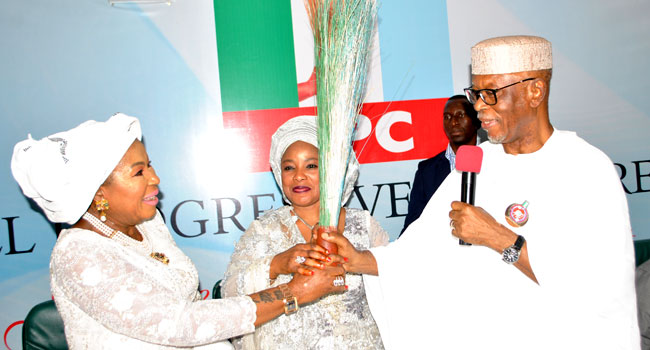 The wife of a former National Chairman of the Peoples Democratic Party (PDP), Dr Ahmadu Ali, Mrs Mariam Ali, has joined the All Progressives Congress (APC).

Mrs Ali was received on Thursday by the APC National Chairman, Mr John Odigie-Oyegun, at the party’s National Secretariat in Abuja.

She was accompanied by the Delta State APC Chairman, Jones Erue, and other party leaders in the state while the event was also attended by the APC National Woman Leader, Mrs Ramatu Aliyu, and the party’s National Auditor, Mr George Moghalu, among others.

The former PDP chairman’s wife said her decision to join the APC was to continue to serve Nigerians, adding that she would be doing herself “a lot of disservices” if her desire was not achieved.

She said: “I know also a lot of people will wonder why I have chosen to opt for a political party different from my husband’s. Again, the answer is not farfetched. My family is a unique family, it is a family devoid of religious and ethnic differences.

“You are all aware that Dr Ahmadu Ali is a Muslim and I am passionate Catholic. Also, Dr Ahmadu Ali is from North Central and I am from the South-South. Therefore, religion and ethnicity do not play a role in our lives.”

Mrs Ali said joining the APC while her husband remains an active member of the PDP displays the uniqueness of her family.

“We symbolise a people who want to serve a nation, a nation where oneness, love and peace reign supreme. Today marks the beginning of greater peace, love, and oneness amongst all Nigerians. It is a new dawn, one nation, one destiny, one people. It is about an indivisible nation, Nigeria,” she added.

In his remarks, Mr Oyegun said Ali’s entrant to the APC has added more value and quality to the party and its leadership both in Delta State and at the national level.

“l am glad that this day has come that you are joining APC because of your determination to render service to your people and the nation, which means that you have looked around, you have looked at your environment in the PDP and you have decided consciously after deep thought that the best vehicle available today on which platform you can render that service is the APC and l want to congratulate you,” he said.

The APC leader added that although Dr Ali was the longest serving National chairman of the PDP, he wished the decision taken by his wife was extended to him.