Another 387 Stranded Nigerians Return From Libya 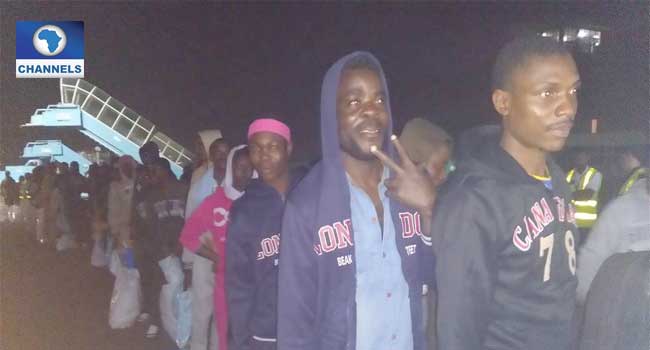 Two new batches of Nigerians stranded in Libya have returned back home.

National Emergency Management Agency (NEMA) received the first batch of 245 returnees and the second batch of 142 others at the Cargo Wing of the Muritala Mohammed International Airport (MMIA), Lagos at 11:25 p.m. on Tuesday night.

The returnees arrived Lagos with Nouvelair airline Airbus A320 with Registration number TS-INA.

The first batch of returnees was made up of 52 adults female, two female children and two female infants and 86 adults male, making a total of 142 Returnees.

The total number of 387 returnees were accommodated in hotels on Tuesday night for them to continue their journey to their different destinations subsequently.

The Osun State government joined Edo and Delta States to take-up the responsibility of catering for the indigenes of their states among the returnees after NEMA and other Federal Stakeholders must have profiled them.

The Zonal Coordinator, Alhaji Suleiman Yakubu speaking with Channels Television enjoined other states government to take the bull by the horn in coming up with rehabilitation and reintegration incentives for the returnees in addition to what is being provided at national and international levels.

International Organisation of Migration (IOM) and European Union (EU) facilitated the repatriation of the voluntary returnees from Libya and are also assisting in their rehabilitation.

Other Agencies that joined NEMA in receiving the returnees on Tuesday night include National Agency for the Prohibition of Trafficking in Persons (NAPTIP), Federal Airports Authority of Nigeria (FAAN) and the Nigeria Police Force.