Events, Issues That Shaped Politics In 2017 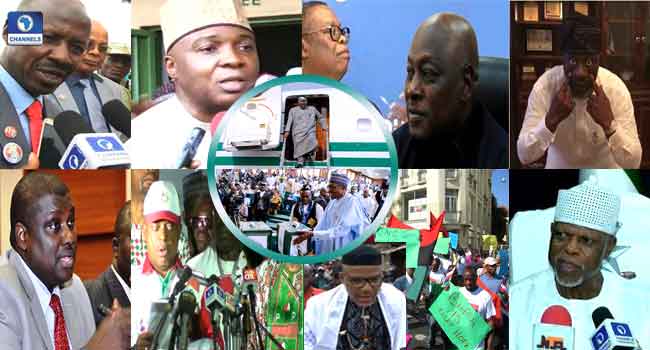 The political year kicked off with medical travels of President Muhammadu Buhari. He extended his medical vacation leaving Nigeria for more than a hundred days to attend to his health. This back and forth trip to London resulted in emotions running high with some calling for the President’s resignation. He later returned to the country and resumed work from home due to supposed invasion of his office by rodents.

The debate about restructuring was on almost throughout 2017. Various public opinion leaders expressed varying views about restructuring Nigeria. While some were in support some others were against. Some even agitated for breakaway and forming of Biafra with Indigenous People of Biafra (IPOB) agitations.

In June, amid the Biafra agitation and IPOB gaining popularity, Arewa group issued a quit notice to Igbos. Their threat sparked outrage and reactions which were later quelled.

The call for restructuring was fuelled by the incarceration of the Indigenous people of Biafra (IPOB) by the Federal Government even as South East governors jointly placed a ban on all activities relating to the group in South East Nigeria.

The year was characterised with defections from one political party to another. This might not be unconnected with plans for the upcoming general election in 2019.

Defections were witnessed in state House of Assemblies, House of Representative and the Senate. The defection saw many cross-carpeting from to the main opposition party (PDP) to the ruling All progressives Congress (APC).

The defection game was messy and as well dramatic.  It even resulted in rowdy session at the House of Representatives as PDP lawmakers staged a walkout during a plenary in protest over the defection of a member, Raphael Igbokwe, to the APC.

The grand defection of year 2017 is arguably that of the former vice President Atiku Abubakar’s from APC to the PDP. After he publicly resigned from the APC, he announced his decision to join the PDP in a live video on his official Facebook page on November 24.

Atiku joined the APC in February 2014 and remained in the party until his eventual exit. He returned back to the PDP according to him because issues which made him to leave the party have been resolved.

The governor of Kaduna state, El Rufai in his reaction to Atiku’s exit called him a serial defector whose action was not surprising.

Senator Dino Melaye stayed in the scene almost all year round. From the certificate scandal, to him wearing an academic gown to plenary and him releasing the Ajekuniya song, the lawmaker maintained a prominent spot in the eye of the news this year.

Senate President Bukola Saraki’s Code of Conduct Tribunal (CCT) over alleged false assets declaration is one of the major political events of this year.

Athough his legal battle did not start in 2017, the trial reached its climax before his acquittal and eventual ruling of a retrial. He was on a regular visit to the code of conduct tribunal (CCT) this year, to answer questions on issues relating to assets declaration.

We know for sure that the last has not been heard of this case. We look forward to more twists and turns in this year 2018.

Every Nigerian budget is most times accompanied with a ready-made controversy. The contentious issues about padding or who has the right to add, to remove or the efforts to normalise the cycle characterize the 2017 budget.

The document was caught in the cross-fire of the untidy relationship between the executive and the judiciary arm. In this cause of this cross-fire the suspended former Chairman of the House of Representatives Committee on Appropriation, Abdulmumuni Jibrin was invited by the Economic and Financial Crimes Commission (EFCC) after exposing what he calls ‘systemic corruption’ while Deputy Speaker of the House of Representatives, Honourable Lasun Yusuf described the widespread allegations of padding of the budget as misrepresentation of facts.

Still talking about the strained relationship between the National Assembly and the Executive, there was mild drama when the Comptroller-General of Nigeria Customs Service (NCS) Hameed Ali was walked out by the Senate for not wearing complete uniform as instructed when he appeared before the lawmaker.

The Senate said the Customs Boss should appear in “appropriate” uniform but the drama continues as he dared the Senate and said he was not appointed Comptroller General of Customs to wear uniform. “Does uniform work or the person behind the uniform?” Ali asked.

He reappeared before the Senate defiantly wearing his mufti.

MAGU AND THE SENATE:

The Chairman of the Economic and Financial Crimes Commission (EFCC), Mr Ibrahim Magu suffered setback from being confirmed as the Chairman of the commission. In July 2016, the Senate received a letter from the Presidency for the confirmation of his appointment of the but he was refused confirmation by the National Assembly.

Till date he’s not yet confirmed as he is still the acting Chairman of the financial agency.

The story of the embattled former Secretary to the Federal Government, Babachir Lawal is another long, dramatic political episode this year.

He was suspended in April for allegedly violating the law and due process in the award of contracts under the Presidential Initiative on the North East (PINE).

After months of controversy, he was fired alongside the Director-General of the National Intelligence Agency (NIA), Mr Ayodele Oke, in October.

Mr Oke was suspended after the Economic and Financial Crimes Commission (EFCC) discovered a huge amount of foreign and local currencies in a residential apartment in the Osborne Towers, Ikoyi, Lagos and the NIA had claimed that the funds belonged to it. The apartment in which the cash was found was later discovered to belong to Mr Oke’s wife

President Buhari took the decision of the suspension two months after he received reports by the panel headed by the Vice President, Prof Yemi Osinbajo and subsequently appointed Boss Mustapha as the new Secretary to the Government of the Federation.

The list of the 2017 political stories will be incomplete without the story of Abdulrasheed Maina.

The embattled former chairman of the Presidential Task Force on Pension Reforms was reinstated and another round of controversies was birthed.

Amid the controversies, the House of Representatives ad-hoc committee was set up to investigate the disappearance, re-appearance, reinstatement, and promotion of the former chairman, Presidential Pension Reform Task Force, Abdulrasheed Maina.

While the Head of the Civil Service of the Federation, Winifred Ekanem Oyo–Ita maintained her position that she had no hand in the reinstatement of Maina, the Attorney General of the Federation and Justice Minister, Mr Abubakar Malami stood his ground that he did not authorise the controversial letter reinstating Maina. As at the time of this report, no one has answers on who reinstated Abdurasheed Maina.

Despite being declared wanted by the Economic and Financial Crimes Commission (EFCC) for an alleged N2billion pensions biometric scam, he spoke out in an exclusive video seeking for an audience with President Buhari’s to prove his innocence.

For the Peoples’ Democratic Party (PDP), 2017 is a defining year. It started with power tussle with troubles reaching its climax when the Supreme Court sacked Senator Ali Modu Sheriff, and empowered Senator Ahmed Makarfi-led caretaker committee leading a landmark decision for the party.

The party also promised a huge comeback went it went into a national convention where Prince Uche Secondus emerged as the Chairman.

The new Chairman immediately after his emergence attacked the All Progressive Congress, (APC) in his acceptance speech as he verbally served the APC a ‘quit notice’, vowing to lead his party back to power in 2019.

The pace for the Anambra election was heightened with Anambra Gubernatorial election debate organised by Channels Television. The debate, featuring five major candidates put them on the spot to explain their plans for the state they plan to govern.

The debate generated huge reaction as Nigerians took to social media using the #AnambraDebates to view their opinion on the performance of the candidates at the debate.

The election saw Mr Willie Obinao emerge governor of Anambra State in a landslide victory defeating his opponents in all local government areas.

The President said the 2018 budget will consolidate on the achievements of the previous budget and that 2018 is expected to be a year of better outcomes.

We hope 2018 will be a year of better outcomes like the President Buhari had said. More controversies seems to be in view as the Senators already rubbished the 2018 budget saying it is filled with inaccuracies, budget padding and inconsistencies.

COVID-19 Protocols: 33 Things Travellers Must Know Before Arriving In Nigeria

Atiku Congratulates Obiozor On Emergence As President-General Of Ohanaeze Ndigbo