Benue Killings: I Have Documentary Evidence Against Miyetti Allah – Ortom 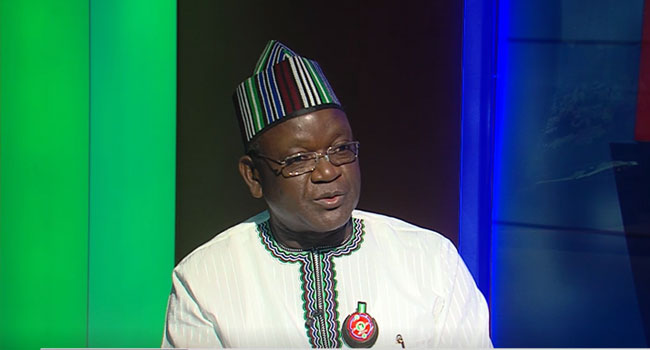 Governor Samuel Ortom of Benue State has insisted that the Miyetti Allah Kautal Hore is behind the New Year attacks in the state.

During an appearance on Channels Television’s Politics Today on Tuesday, the governor talked about his meeting with President Muhammadu Buhari, the President’s directive to the Inspector-General of Police, his grouse with Miyetti Allah and the solution to the herdsmen/farmers crisis.

What can you tell us about your meeting with the President and what are the interventions he promised you?

My meeting with Mr President today (Tuesday, Jan 9) was very fine. He did express his sympathy and condolences to me and the people of Benue State again and appreciated the efforts that we’ve been able to make so far to contain this challenge.

He did assure me that he is not leaving any stone unturned until we are able to surmount this challenge and he has directed the IG to relocated to Benue State and to ensure that this does not happen again. He is also gathering other intelligence to see what can be done further to ensure that we eliminate this. He also confirmed that criminals will not be spared and there is no room for anyone that comes to kill in the name of anything whatsoever. Human lives are precious and should be respected. And he is going to do everything to ensure that the perpetrators are brought to book and sanctioned. I think that is the right way to go.

I repeated my calls for the arrest of the leadership of Miyetti Allah Kautal Hore who are the perpetrators of this. These are known people. These people gave this threat right from the day we signed this (anti-grazing) bill into law – on 22 of May 2017. And when they did a press conference in Abuja in June, I immediately petitioned against them that these people should be arrested to the security agencies. They continued this threat when I had even given a grace period for the commencement of this law on November 1, 2017. They continued with their threat and I further reminded the security agencies that there was the need to arrest these people. Unfortunately, the process, as I am told, is ongoing, but no arrest was made until we saw this unfortunate thing that befell us on the first of January and instead of celebrating, we went into mourning. It is unfortunate, and I think things need to be done because impunity should not be allowed to thrive in Nigeria.

The President has asked the Inspector-General of Police to relocate to Benue. Have you been able to speak with him and has he told you when he is going to resume duties in Benue State?

We spoke, and I am waiting to receive him here in Makurdi this evening. He has convened a stakeholders meeting tomorrow here in Makurdi and I am supporting him. I am going to do everything possible to ensure that his mission as directed by Mr President is successful and I believe that with this directive, there should be a new relieve for the people of Benue. As I talk to you, there over 60,000 refugees. People are running all over the place; some out of fear of the unknown are just running to unknown destinations and I have refugee crisis on my hands at this time because these people have continued to issue threats and they are confronting even the security men that are here. Even today, the soldiers that were deployed in my council area in Guma Local Government Area, they confronted them.

Did you speak to the President specifically about Miyetti Allah?

Of course, that is what I am saying. I have spoken to him that those are the people I know and I have documentary evidence against them.

What makes it difficult for this Miyetti Allah leadership to be arrested if, according to what you have said, they are the alleged perpetrators?

Well, I am told that arresting (people) is a process. So, that is ongoing. That is what I have been told, but there is need to arrest these people because if we allow them to go scot-free, it will not serve this country good. Like I always say, if you allow impunity to thrive, you are asking for anarchy. It is wrong. I am a law-abiding governor and all I have been trying to let my people know is that for development to come to Benue, we must be law abiding. Let the people know that we do things in an orderly manner, we don’t just do things anyhow. When I came in (as governor) I disarmed the youths who were armed. Today, relatively, we were peaceful until this unfortunate incident happened. Benue State was putting itself together. It is difficult to say (what makes the arrest difficult) since I am not a security agent and I am not a professional in that area, but I am told it is a process that will continue. I think that I have done the needful, the people of Benue have done the needful and what is needed is intelligence gathering to security agencies. This we have done.

Are there members of the Miyetti Allah, the alleged perpetrators of this attacks, who are from Benue because at some point, the IGP has been reported to have described this incident as a communal clash?

I want to believe that the IG was misquoted because he can’t say that. He is aware that the police in Benue are already prosecuting some violators of this (anti-grazing) law and even those who were arrested after the 1st of January mayhem on our people… even today, two people who were arrested as a result of these killings were arraigned.

Going forward, what would you say is the lasting solution to this problem?

The lasting solution to the problem is what we have done – ranching; nothing but ranching. Globally, the best practice for cattle rearing and breeding is ranching. All over the world, that is what is obtainable. Yes, we promulgated this (anti-grazing) law and we have started implementation. As I talk to you, over 20 people who violated this law – both the herdsmen and indigenes of this state – are in prison; they have been arraigned by the police. Now, you can see that the herdsmen/farmers clashes are all over the country; in Adamawa, in Kaduna, Plateau, Abia, Ebonyi, all over the place. It is happening. We must adopt modern ways of doing things. The population is not the way it used to be in the 50s when there was open grazing and cattle routes… My worry now is for these militia men to be (going about) killing security agents. It becomes a very disturbing problem if trained security agents who are armed are killed and slaughtered as we saw in Logo Local Government Area. But thank God, the IGP is coming here and I hope that normalcy will be restored.

Interview: Why We Removed Fuel Subsidy And How It Will Pay Off – NNPC GMD