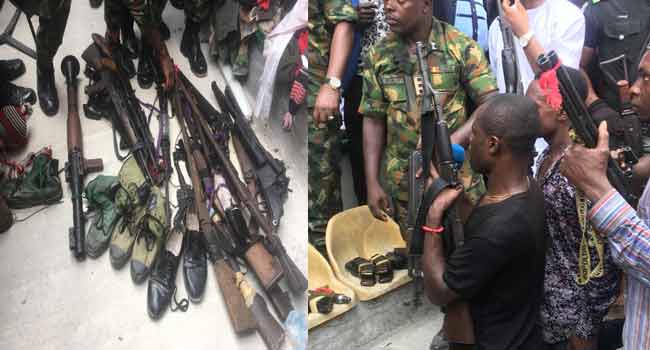 A ‘notorious cultist’ in the Niger Delta region and member of recently slained Don Waney’s gang has renounced cultism and surrendered various arms and ammunition pleading for state pardon.

Rivers State born Don Waney was killed in January 2017 after a joint effort of 6 Division Nigerian Army and DSS operatives in Port Harcourt, Rivers State. Waney was shot and killed alongside his second-in-command, Ikechukwu Adiele, and another member of his gang, Lucky Ode while trying to escape arrest.

His younger brother, Oluchi Igwedibia, popularly called Obatosu was killed on Saturday, January 27 by a joint operation of the Army and the DSS following intelligence report of the State Security Services, Rivers State Command.

Another member of his gang, Emenike Akam popularly known as Number One Red Squad General surrendered in Imo State on Monday, February 5, alongside over 200 cultists and militants. 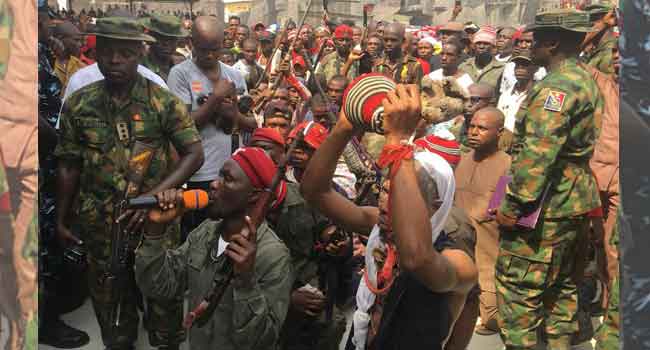 Emenike Akam surrendered his arms alongside members of his gang. They appealed for state pardon calling on the state government to forgive them and that they are ready to reintegrate back into the society.

Some of the gang members gave unemployment, hunger and poverty as reasons why they have towed the path they took.

Receiving the repentant militants and cultists at the Freedom Square in Owerri, the Imo State capital, Governor Rochas Okorocha said it is good news that the repentant cultists have decided to tow a new path and reintegrate back into the society. He said the state government will look for means to rehabilitate them and ensure that they are good citizens of the state.

“It is very shocking to note that most of the avengers and Don Wanney operatives are our sons and daughters we have them in the Ohaji/Egbema, Awara and other areas where people have been on self-exile for many years.

“But today these our children have decided on their own to come back to the society and be part of the society. They are doing so on their own, surrendering arms which they have used in committing criminal activities for what they called expression of grievances of different sorts,” he said.

He said further that the Imo State is ready to receive them and listen to them so as to integrate them back into the society.

Gunmen Kill One, Abduct 10 In Nasarawa

Ijaw Youth To Engage FG In Resource Control And Ownership