Unions Protest, Shut Down Federal Ministry of Science And Technology 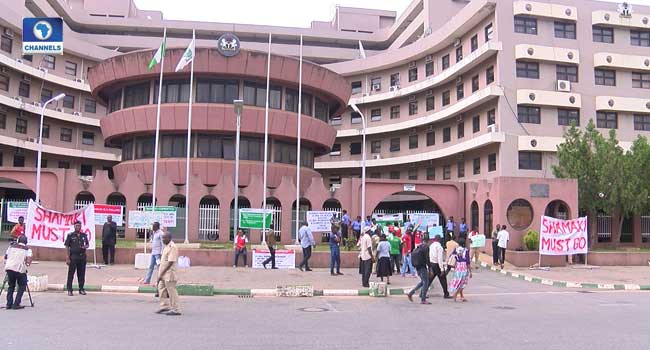 Members of the Academic Staff Union of Research Institutes (ASURI) and workers at the Federal Ministry of Science and Technology have downed their tools, shutting down the Ministry.

The workers are calling for the removal of the Permanent Secretary of the Institute, Dr Shamaki, accusing her of frustrating the activities of the research institutions.

The workers have also embarked on a three-day warning strike across the nation.

The protesters, on Monday, walked into the office complex, locking up offices thereby bringing activities at the ministry to a halt. 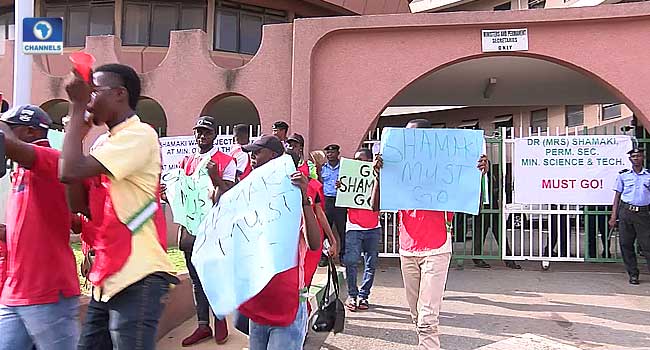 They also occupied the gate of the ministry, bearing placards with various inscriptions, calling for the dismissal of the Permanent Secretary.

The Secretary-General of ASURI, Theophilus Ndubuaku told Channels Television that the Permanent Secretary has refused to recognise top officials appointed by the Minister of Science and Technology.

“She walked out the acting EVC from a meeting at the research institute some few weeks ago and said that she does not recognise his appointment,” Ndubuaku said.

He, then, called on the Secretary to the government and the Minister of Science and Technology to intervene in the crisis.

Ndubuaku threatened that the three-day warning strike will continue if no response is gotten from the Federal Government.

‘We Are Sorry’: Osinbajo Apologises To Nigerians As Protests Against Police Brutality Continue