Osun Election: Why I Formed A Coalition With APC – Omisore 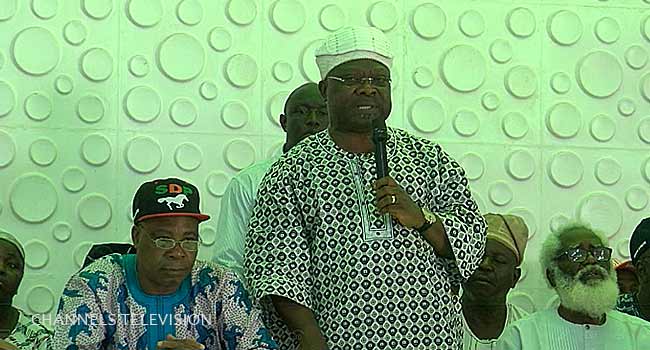 The candidate of the Social Democratic Party (SDP) in the just concluded Osun governorship election, Senator Iyiola Omisore, has explained the reasons behind his support for the All Progressive Congress (APC) during the supplementary election.

At a town hall meeting with party members in Osogbo the state capital, on Thursday, Omisore said he gave his support to the APC to have a coalition government which will birth development in the state.

He said, “We pride ourselves with good governance in this state which prime among them is the love for civil servants, the payment of salaries when it is due, pensioners’ payment, educational system to be rejigged, agriculture, commerce, infrastructural access, distribution of amenities to all, employment opportunities for the youths.

“We went into negotiation with a very clear mind that Osun must be first and it must be salvaged from destruction, from the way it is going. We must come to the reality of time and thank God our coalition government has given us the future for this state which we all shall share in the years to come”.

Omisore added that there is no iota of truth in the rumours that he had collected money from the ruling party.

According to him, he only gave his support because the party accepted to work with the blueprint of the SDP.

He said, “The National Chairman of the APC, Adams Oshiomhole, addressed a press conference a few days ago and he said clearly that our discussion was devoid of any financial discussion. It was about nothing but good governance in Osun State and our resolve to work together in all spheres of the economy.”