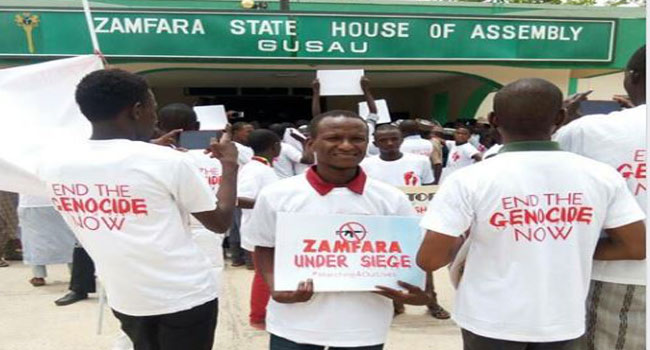 The Senator representing Kaduna Central in the National Assembly, Shehu Sani has accused northern elites of giving the killings in the region a positive nod with their silence.

Shehu Sani said the northern leaders have been quiet over the issues of killings and kidnapping around the region because the poor are the ones who suffer the most for the menace.

Sani who took to Twitter to air his views regarding the latest massacre in Zamfara state said in a bid to remain in the good books of the government, northern elites have continued to keep mum.

Northern political elites are silent on the frequent killings and kidnappings in the north out of any of these three reasons;FEAR not to be seen opposing the Government;BELIEF that the President is doing his best;INDIFFERENCE because it’s the poor that are dying.

The lawmaker also lamented that mourning is becoming synonymous to Zamfara, saying that the killings and funerals have become so frequent that the issue is not given the attention it deserves.

Mourning & funerals has become part of the daily lives of the people of Zamfara & Birnin Gwari.Because of the frequency of killings,The FG & states have ran out of condemnations & sending condolences to the families of the victims,the Press too no more treat it as a cover story.

Sani also spoke about killings in Kaduna saying that there is a herder crisis which is being played down. He urged Kaduna residents to stop listening to politicians peddling fake information aimed at making themselves look good.

There is herder crisis in Kaduna;there are killings & kidnappings;visit Birnin Gwari & parts of southern Kaduna;listen to the orphans,the widows & the families of the victims.Don’t listen to a politician giving you false information & impression to embellish his stewardship.

The Zamfara State Police Command confirmed the attack and the figure in a statement on Sunday by its spokesperson, Mr Mohammed Shehu.

Mr Shehu said the assailants stormed the village in the late evening of Saturday and attacked innocent villagers.

Following the incident, he said the command deployed an additional unit of operatives comprising the Police Mobile Force (PMF) and Counter-Terrorism Unit (CTU) in the area.

According to the command’s spokesperson, the police personnel were directed to operate in collaboration with the military and other security personnel already deployed in the area.

He added that the team was asked to restore normalcy in the area and prevent any security threat by any disgruntled person or group.

Shehu revealed that the Acting Governor of the state, the Commissioner of Police, and heads of other security agencies in Zamfara had visited the scene earlier on Sunday.

He said efforts were ongoing to arrest the culprits and bring them to justice while appealing to the people to cooperate with the security agencies.

The Kukah Offence And Ongoing Offensives By Wole Soyinka