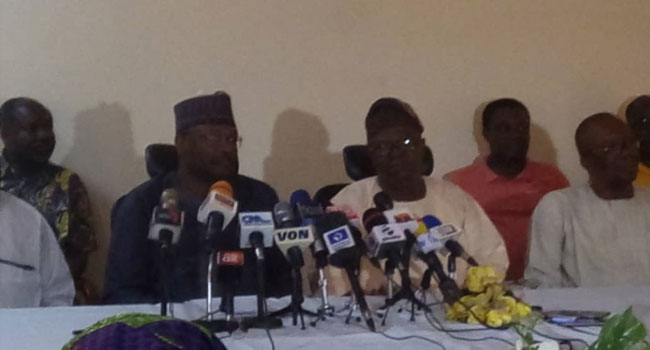 The Academic Staff Union of Universities (ASUU) has committed to allowing its members works as INEC ad-hoc staff in the forthcoming elections.

This was the outcome of a meeting between the INEC and ASUU officials in Abuja, the nation’s capital.

At the meeting, the chairman of INEC, Professor Mahmood Yakubu complained of being understaffed for the elections hence the need to employ youth Corp members and students in various capacities.

He also stated that 42 days is too short to train additional staff if the academia does not avail its services as they have been known to.

Reacting to the controversy over the appointment of Amina Zakari as chair of the collation centre committee, the chairman insisted that Mrs Zakari, a national commissioner is not related to President Muhammadu Buhari.

It had been widely reported in the media that Zakari is a niece of the president, her appointment was not warmly welcomed by some including members of the Peoples Democratic Party, PDP.

The INEC has earlier said that the controversy generated by Zakari’s appointed was unnecessary.

Professor Yakubu in weighing in on the war of words that have ensued after Zakari’s appointment said, “Let me say categorically that she is not related to the President. She is from Jigawa State, the President is from Katsina State.”

The INEC chairman dismissed allegations that Zakari could help manipulate the outcome of the presidential election in favour of President Buhari.

“Let me state this very categorically, that the responsibility for managing the venue does not in any way involve the collation of results,” he explained.

“Under the Nigerian Constitution, I am the Chief Electoral Officer of the Federation and the Returning Officer in the presidential election. I am not going to share that responsibility with anyone in the commission,” Prof Yakubu stressed.