#EndSARS: This Evil Act Has Been Endured For Long, SARS Must Leave Us – Nigerians React 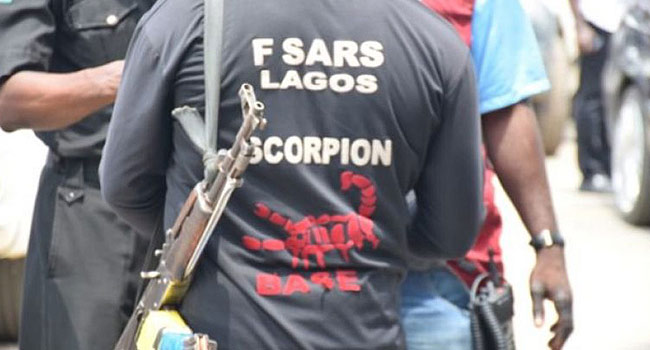 The tragedy which struck on Olu Aboderin Street, Onipetesi area of Lagos State, on Sunday has stirred protests across social media, with Nigerians demanding the end of the Special Anti-Robbery Squad (SARS) police unit.

Reports suggest that operatives stormed an eatery in the area to arrest a man, who was watching a live English Premiership League football match between Liverpool and Tottenham Hotspur.

Sources said the victim who was a friend of the man to be arrested, challenged the operatives on why they would cart away his friend and one of the SARS operatives allegedly shot him dead.

Angry youths took to the streets in protest of the killing.

They blocked the two sides of the Lagos-Abeokuta Expressway and set up bonfires, causing traffic gridlock in the process.

The protest did not, however, stop on the streets, as many Nigerians, groups, and organizations took to social media to protest and seek redress for the killing.

Below are some of the reactions by various Nigerians, as drawn from Twitter.

The reoccurring issue of #PoliceBrutality is a clear indication of how untrained, unprofessional, and how uncontrollably violent the Nigerian police are to the people it should protect.#RedefineNigeria #EndSARS #EndPolicebrutality #EndSACS

When you employ and recruit criminals and miscreants as law enforcement agents,i don’t expect less than what they are doing at the moment,policing in Nigeria is corrupt itself… #EndSARS

We really need to bring our voice together to #ENDSARS #PoliceReforms

Life has no value in Africa, it is time to stand against this and to scream loud enough is enough to violate human right. #EndSARS

How can someone say that the mindless killing of Kolade Johnson by SARS operatives is a mistake? How many of such mistakes are we going to let slide down the drain without making this lawless police cartel to answer for their crimes? #EndSARS #EndPolicebrutality

Where I am from, you can be unlucky to be at the wrong place at the wrong time and get killed by overzealous police officers. #ENDSARS #EndPoliceBrutality

Stop tagging celebrities or police, let’s go and protest. The president and VP has an office , the Senate has a complex, our lives matter #EndSARS

We can’t continue like this as a Nation. Maiming of innocent people. This people should begin protecting us, not the other way round. Redeploy these guys to Zamfara, Kaduna, Borno, Benue, Adamawa and other states where you have terrorists, bandits, herdsmen & criminals #EndSARS

What you don’t want, you don’t watch. If injustice has definition when you are a victim of its devastation, it is either you were once its beneficiary or a subscriber to the theory that question its existence.

When it’s time to do illegal things in the name of ensuring justice you rush and do them, however when those in the same arm of government as you, agents under your supervision keep on causing havoc you and your supporters are no where to be found. No problem #Endsars #Endsars

Now…
it’s crime to watch football.
It’s crime to ask SARS questions on why arrest.
It’s even crime to carry dreadlocks ….
But it’s not crime to rig election or make inec announce someone winner under duress….#Nigeriasucks, #SARSsucks
We demand #EndSars $ #Justice4Kola

Every unjust death anywhere in the world diminishes humanity. The only way to secure your rights and peace is to fight for those who want to be free. #EndSARS

But this dream is an illusion cos

I live in a country where our leaders are more interested in happenings abroad than home, yet, charity is said to begin at home.

These gruesome murder of innocent Nigerians has to stop. We are not animals. We are humans. Even animals don’t deserve to die anyhow. #EndSARS

The lives of every Nigerian matters. It’s time to put an end to killing of innocent Nigerians. #EndSARS

When purpose is not known abuse is inevitable. Why would a SARS official or police officer go through my phone? Is that their job? Are they not supposed to carry out investigations, build cases and arrest criminals with proof then wait for the courts to pass judgement? #Endsars

You call murder , a case of excessive use of force.

Fellow Nigerians with non-pedigree surnames, or alliances with government, this is it, we are finished!!!

When they were shooting sporadically without cause , did they think that hey we’re shooting blanks ?#ENDSARS

I pray it doesn’t get to the point where citizens see SARS officials and start attacking them.
These acts of violence is getting out of control.
We’re treated badly out there, and we’re still not safe in our fatherland. #EndSARS

They let us hurt till we became blinded by rage. #EndPoliceBrutality

The most painful part of this issues about the police force that has been going on is, this brutality is now becoming part of us such that we only complain and that’s the end of the case.
In foreign lands, proper investigation is done and they are dealt with. #EndPolicebrutality

We must all join our voices to ensure the ruthless killings and Harris Emy by FSARS, all over the country Nigeria comes to an end. In Ikot Ekpene, Akwa Ibom State the harassment on innocent citizens detest me that’s why I lend my voice in saying let’s #ENDSARS

Let take a moment today to remember Kolade Johnson , the young Nigerian who was brutally shot dead by men of the anti cult unit of SARS at Mangoro bus stop Pentecostal filling station.
Join your voice to call for the #ENDSARS #EndPolicebrutality

Takes a sec to Retweet pic.twitter.com/G6oNVzZRM3

One Killed As SARS, Robbers Exchange Gunfire In Lagos

Four Major Recommendations By The Special Panel On SARS