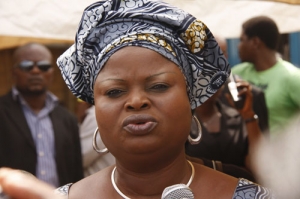 The Lagos State Deputy Governor, Mrs. Adejoke Orelope- Adefulire, on Monday, made a clarion call for collective commitment towards putting a stop to all forms of sexual harassment, assault and abuse particularly rape cases against the girl- child.

She added that everyone must be ready to break the culture of keeping silent on rape cases and violence. She recalled the 700 black high school children who were massacred in Soweto South Africa that led to the celebration of the International Day of the African Child.

She explained that the objective of the media briefing was to call for more action to raise the tempo of awareness and sensitize the society on the measures to safeguard the rights of the child as enshrined in the United Nations Convention on the Rights of the Child 1989.

Mrs Orelope-Adefulire said that various forms of abuse such as sexual harassment, domestic violence, forced marriages, kidnapping, rape, abduction, child trafficking, neglect and denial of education have become rampant and to address this situation, she called for the introduction of stringent sentences.

The Deputy Governor also reiterated the call for the rescue of the schoolgirls who were abducted from Chibok in Borno State in April and appealed to the nation’s leaders to do everything possible in ensuring that the innocent girls were brought back alive as soon as possible.

According to the Deputy Governor, parents and guardians, especially the mothers should be more vigilant, available and committed to the welfare of their children by balancing their careers with their duties as mothers.

She reiterated her call for the conduct of psychiatric tests on perpetrators of rape and sexual harassment, which she said has been on the increase, adding that some of the cases are simply inexplicable and calls for concerns.

Public, Private Schools To Resume In Lagos On January 18 – Govt