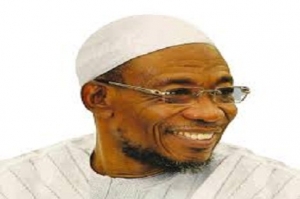 The Osun state government has commissioned the Ayegbaju International Modern Market. The market, situated in the heart of Osogbo town, the state capital, sits on a 8-hectare piece of land  and is estimated to have gulped about 2.3 billion Naira.

Inspite of the heavy downpour on Monday, Traditional Rulers, Market Men and Women, clerics and residents of Osogbo Town all sat under a tent to celebrate the commissioning of the market.

The Commissioner for Regional Integration and Special Duties, Basiru Ajibola,  explained that the market has three phases and that only two phases have been completed, saying that the last phase will soon be ready for commissioning.

According to him, government has approved the construction of two other ultra-modern markets in Ilesa and Ife respectively.

The governor, Rauf aregbesola, who was obviously elated at the fast pace of the  project, which commenced in October 2012, said the whole idea is to develop Osun State as the International Market will enhance the economy of the state.

After the commissioning the governor took a walk around the edifice, which has interesting features like open stalls, lock up shops, office spaces, warehouses , medical centre, mosque, trailer parks, fire station, bank, police post and a cold room .

The third phase when completed is expected to have a three star hotel, a shopping mall and a cinema.