Jonathan Will Beat Buhari In The North – PDP 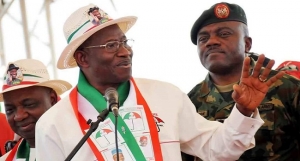 The party also said with President Jonathan’s soaring popularity among the voting population across the country, it would win more than two-third of the total votes cast as well as the required 25 percent in all the states of the federation.

PDP National Publicity Secretary, Olisa Metuh, in a statement on Saturday, said that President Jonathan would beat Buhari in the north not only because the PDP controls 12 out of the 19 states of the region but also because the citizens are pleased with the numerous development projects he executed in the region.

The party said that the various projects and appointments in the north have placed President Jonathan ahead of Buhari especially following the fact that the APC presidential candidate never executed any in the region when he was Head of State and has so far failed to articulate an acceptable blue-print for development.

“Indeed, Nigerians in the north are eager to re-elect President Goodluck Jonathan come February 14, 2015. Voters in the region appreciate the direct positive impact of the numerous development projects executed by the Jonathan administration in all sectors of life.

“They appreciate the fact that recognizing that agriculture is the mainstay of the northern economy, President Jonathan ensured that out of the 2.7 million direct farm jobs achieved by his administration, over 2 million are in the north.

“They appreciate the fact that President Jonathan established the e-wallet system, which eliminated the corruption in the distribution of fertilizer and other farm-puts, making the products directly accessible to millions of farmers in the region thereby boosting their productivity. They appreciate the fact that silos are brimming and food pyramids are returning in the north.

“In education, President Jonathan’s imprint in the north remains indelible. Today, the once relegated Almajiri boys can now go to school following the establishment of the Almajiri System of Education, the first of its kind, with over 150 special schools already built, while others are nearing completion, a noble idea, General Buhari never thought of when he was head of state.

“Also, out of the 14 new universities established by President Jonathan, 9 are located in the northern states thereby ensuring that all states of the region have a federal university. This is in addition to the establishment of new secondary schools and training of teachers for quality education in the region.

“Furthermore our citizens in the north are happy with President Jonathan for his efforts in tackling desertification in the region especially with the establishment of more than 80km of 15–row Green Belt in addition to the Presidential Initiative on Afforestation in Kano and 10 other Northern States,” the statement read.

The party also recalled the increased attention to the health need of the area especially the interventions towards polio eradication and treatment of VVF among others.

Noting that President Jonathan has repositioned the region for prosperity, the party pointed out that the north stands to benefit immensely from the revitalization of the railways, especially the rehabilitation of the Minna-Kaduna-Zaria-Kano narrow gauge, the Markurdi-Lafia-Kuru-Bauchi-Gombe-Ashaka-Maiduguri line and the branch line from Kafanchan to Kaduna, which are expected to increase productivity in the region.

The party also noted that roads in the region have received serious attention under Jonathan, citing the decades-long intractable Kano-Maiduguri highway, the longest stretch in the country, which they said was being successfully tackled in addition to the Abuja-Lokoja road.

The PDP also said that the dredging of the River Niger from Lokoja to Baro in Niger State have also contributed in placing the north on a sure path to economic prosperity.

It cited the acceleration of work on the Geregu power station, the 700MW Zungeru Hydro-Power, the ‎3,050MW Mambilla Hydro-Power among others in addition to various dam projects including the Kashimbila Multipurpose Dam, which they said was being built to contain flood from Lake Nyos in Cameroon.

The PDP insisted that Nigerians in the north are mindful of the fact that their collective interest and aspiration are better protected under Jonathan hence the support and eagerness to re-elect him come February 14, 2015.