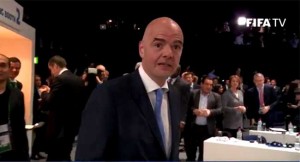 Gianni Infantino has been elected as the new President of FIFA.

The UEFA General Secretary defeated all other candidates at the Extraordinary FIFA Congress at the Hallenstadion in Zurich on Friday afternoon.

The South African, Tokyo Sexwale, withdrew moments before the first vote. Sheikh Salman had been favourite to succeed Blatter because of support from the Asia and Africa, while Infantino had the backing of UEFA members.

“I cannot express my feelings in this moment. I told you I went through an exceptional journey, which made me meet many fantastic people, who live and breathe football, and many people deserve to see Fifa is highly respected.

“I want to work with you to establish a new era in which we can put football at the centre stage,” he said in his acceptance speech.

Infantino has been popular as a compere for various Uefa events. He will serve as the FIFA President until the next FIFA presidential election in 2019.

The final tally is as follows: