Saraki’s Trial: Witness Admits His Team Did Not Investigate Exhibits 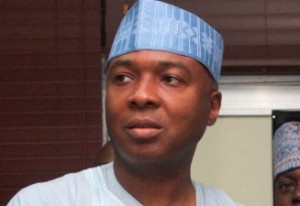 The trial of the Senate President, Dr. Bukola Saraki at the Code of Conduct Tribunal (CCT) resumes on Tuesday.

At Tuesday’s hearing the chief prosecution witness, Mr Micheal Wekpas, during cross-examination admitted that neither he nor his team investigated some of the exhibits he had tendered before the Tribunal.

Mr Wekpas, who is an operative of the Economic and Financial Crimes Commission (EFCC), under cross-examination by the defence counsel, Kanu Agabi, told the court he did not investigate the petitions whose exhibits were tendered before the court

He said that even though his investigation stemmed from an intelligence report obtained by the EFCC, he did not have the report, neither was the report before the Tribunal.

The witness was first questioned on exhibit 11, 12, and 13 which were petitions written by a group known as Kwara Freedom Network, inviting the EFCC to investigate the Kwara State Universal Basic Education Board and borrowings for projects.

Mr Wekpas, who had earlier told the Tribunal that the petition formed the bases of his team’s investigation, however, said he did not investigate the petition, rather another team carried out the investigation.

When asked why he tendered documents he did not investigate, the witness said he carried out the directive of the prosecution.

Also under cross-examination, the witness admitted that investigating the assets declaration of the Senate President did not form part of his schedule of duty.

He explained that three exhibits, which were assets declaration forms of the defendant, were duly examined and stamped by the Code of Conduct Bureau when the documents were shown to him

Mr Wekpas said there was nowhere in the petition that they investigated ‎where Saraki’s asset declaration was in contention.

He said the investigation of the defendant was based on intelligence report obtained by the former Chairman of the EFCC, Ibrahim Lamorde and not the three petitions tendered as exhibits and that such intelligence was either provided orally or produced in writing by people who asked to remain anonymous.

The witness stated that the six assets declaration forms submitted by Senator Saraki to the Code of Conduct Bureau were not investigated by his team.

He, however, said his team was directed to investigate the intelligence report alone.

According to him, the intelligence report is not before the Tribunal as exhibit.

Attempt by the prosecution to seek for a long adjournment to enable it study the documents tendered as exhibits was rejected by the Tribunal.

The defence is expected to continue the cross examination of the witness on Wednesday.

Tuesday’s session comes a day after the first prosecution witness alleged that the defendant failed to declare houses in the United Kingdom, as well as the upscale areas of Ikoyi, Lagos and Abuja.

The witness, Mr Michael Wetkas, an operative of the Economic and Financial Crimes Commission (EFCC), was led in evidence by the lead prosecuting counsel, Mr. Rotimi Jacobs (SAN).

He gave the names of various companies allegedly operated by the Senate President while he was the Governor of Kwara State between 2003 and 2011.

The prosecution witness tendered the Senate President’s asset declaration form for the year 2011 as exhibit, with the defence counsel reserving its objection to a later date.

Earlier in the trial, the Chairman of the CCT, Mr Danladi Umar had declared that he would not suspend the trial of the Senate President to allow the Senate to continue sitting since the red chamber was not on trial before the tribunal.

Dr Saraki is facing a 13-count charge of alleged false declaration of asset while he was Governor of Kwara State.