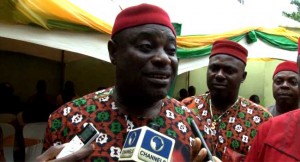 The National Chairman of the All Progressives Grand Alliance, APGA, Mr Victor Oye, has waded into the leadership crisis rocking the party in Orumba North Local Government Area of Anambra State.

The party members unanimously rejected the party leader imposed on them and publicly announced their rejection.

The National Chairman, Mr Oye, has now stepped into the matter in a meeting with party members, where he recognized Okwudili Ezenwankwo, as the leader of the party in Orumba North.

He said that his recognition of Mr Ezenwankwo as Chairman Orumba North was final.

Speaking with Channels TV at the meeting, he said “There is no problem in Orumba North as far as I am concerned. Whatever we are doing about Orumba North today is how to position the party in that place to win elections.

“We don’t have any personality clash. For what? APGA is very united and I am very serious about it.

“What the party does by recognising some people is a mark of honour.” He added that the party would only work with members who show commitment and loyalty to the party at all times.

Mr Ezenwankwo also spoke to Channels Television and maintained that he was not expecting maximum consent for his new position but he would ensure that unity prevails.

“When the party appoints a leader, it is not a must that everybody will agree but what you have to do is to bring all the people together, tell them why we should work together for the interest of our party,” he said.