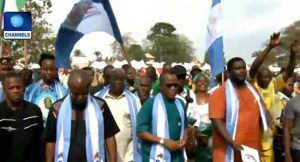 Political alignments and realignments have become the order of the day in Anambra State, ahead of the November 2017 governorship election in the state.

Mr Okwu, a former APGA National Chairman, explained that the move followed his rejection by the APGA leadership, despite the intervention of Anambra State Governor, Willie Obiano.

He said his attraction to the new party was as a result of its sincerity and stable internal democracy.

Speaking at a rally in Awka, the National Chairman of PPA, Mr Peter Ameh, noted that the party can withstand other parties in the state.

Anambra State PPA Chairman, Mr Godwin Ezeemo, also said the masses have been given the option to live again in PPA, citing the provision of level ground for all players in the party.