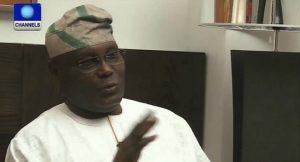 The former Vice President, Atiku Abubakar, is in support of the restructuring of Nigeria along federating units.

He stated that Nigeria is not working as it should because the centre has more powers than the federating states.

The former V.P said that a restructuring would foster national unity and integration, and also lay to rest the continuous agitation for resource control and creation of more states by different geo-political zones.

He made the remark in Kaduna State during the memorial conference for late General Hassan Usman Katsina.

Speaking on the topic, “Restructuring Nigeria For Greater National Integration and Democratic Stability”, Atiku said that there is the need to restructure the nation to make it stronger and more united.

According to him, while Nigeria must remain a united country, the unity which most citizens desire should never be taken for granted or taken as evidence that Nigerians are contented with the current structure of the federation.

The conference which had the theme: ‘Challenges of National Integration and the Survival of Democracy in Nigeria’, gathered dignitaries who came to celebrate the former military governor of the defunct Northern region, General Hassan Katsina.

Atiku also argued that the current presidential system of governance has thrown up so many issues in the polity such as struggle for power rotation at the centre, and overbearing control of resources by the federal government with limited resources going to the states and local governments.

The former Vice Chancellor of Ahmadu Bello University, Zaria, Professor Ango Abdullahi, cautioned the agitators for control of oil deposits in the Niger Delta region to have a rethink.

He argued that it was the proceeds from the North that was used in developing the country before the advent of oil.

He also stated that Nigeria is divisible if the various political zones fail to work collectively as one, stressing that the north is not scared of separating from the rest of the country.

President Muhammadu Buhari who was represented by the Minister of Interior, Abdulrahaman Danbazau, said that the time to achieve national unity was now, considering the numerous security and economic challenges confronting the nation.

He also stated that good governance remains the key for the sustenance of national integration, adding that the federal government under his leadership is making effort to enthrone political stability and protect the lives and property of every citizen.