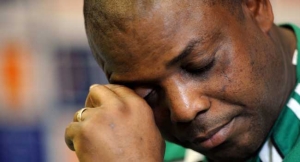 The remains of former Super Eagles coach, Stephen Keshi has finally been laid to rest in his hometown, Illah Delta State.

During the requiem mass at Saint John, the Evangelist Catholic Church, the officiating priest described Keshi as a man who lived a life of service.

His former assistant, Valeri Hondonou wants his name immortalized while Dayo Enebi spoke of his love for everyone