Budget Padding Is From Executive, Not National Assembly – Ozekhome 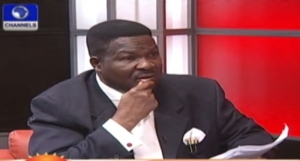 A constitutional lawyer, Mr Mike Ozekhome, believes that the padding of the 2016 budget originated from the executive arm of government and not the legislative.

The legal practitioner, who spoke on Channels Television’s breakfast programme, Sunrise Daily, linked his opinion to the sacking of some officials at the budget office by the President.

“The real padding in this current budget was actually from the executive, not from the National Assembly.

“President Muhammadu Buhari had to sack some people in the budget office when he discovered through some ministers who literally denounced their appropriation figures before the National Assembly, saying (that) it was not my deed (what we call ‘Non Est factum’ in law),” he stated.

Mr Ozekhome expressed dismay that the sacked officials were yet to be arraigned before a court.

On the other hand, he explained that padding would have occurred at the National Assembly if figures were smuggled in the budget, after the lawmakers had made a resolve.


“Padding can only occur in the National Assembly if figures are smuggled in, after the finance committees at the various appropriation committee (Finance Committee, Budget Committee and the National Planning Committee) have agreed.

“If after they have agreed on certain figures debated and approved by the House itself at a plenary session, someone manages again to smuggle in some figures, then that could be padding,” he said.