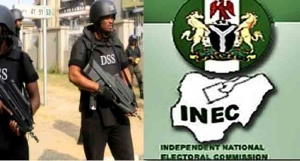 The two leading parties in the Edo state have been reacting to the postponement of the governorship election to September 28.

The electoral body made the U-turn on Thursday evening, few hours after it had said that it would go ahead with the election against the advice of Nigerian security agencies.

The Nigeria Police Force and Department of State Services (DSS) had advised the Independent National Electoral Commission (INEC) to postpone the governorship election scheduled for Saturday for security reasons.

The two security agencies said the advice was based on credible intelligence at its disposal, which suggested that insurgents were planning to attack vulnerable communities and soft targets, with high population during the forthcoming Sallah celebrations between 12th and 13th September.

Meanwhile, the PDP and the APC have reacted to INEC’s decision to postpone the Edo polls.

The State Chairman of the APC, Mr Anslem Ojezua described the postponement as not unusual.

He also said that securing the lives of residents in the state must remain a priority.

Shocking And A ‘Bizarre’

On his part, the PDP Chairman in state, Mr Dan Orbih said that the nation’s democracy is being threatened.

“The political parties in the state should see this as a challenge.

“We must rescue democracy. It is under serious threat with what we are witnessing today in Edo State,” Mr Orbih stressed.

After the security agencies gave the advice, the PDP said it was shocking and a ‘bizarre’.

The PDP, which claims to be the strongest opposition in the state, said it was taken aback on this advice, coming a day after President Muhammadu Buhari attended a Mega Rally of the All Progressives Congress in Benin City which was concluded without any hitch.

A statement on September 7 by the party’s spokesman, Day Adeyeye, highlighted that INEC recently conducted a ‘hitch free’ Senatorial By-Election in Borno State which is a high-point of insurgency in the Country and wondered why the Security Agencies saw no reason to call-off the Election.

They have been no report of any bomb attack in Edo State in the last six years that insurgency was at its peak in Nigeria’s northeast, something critics said  apparently made the advice appear shocking to the party.

“It is therefore lamentable to hear from these same security agencies that the Election cannot be held in a State where in less than 24 hours, the President and all the APC leaders and members had an uninterrupted Rally.

“We are calling on the President, Muhammadu Buhari to caution the security agencies and direct them to provide full security, and also to desist doing anything that will jeopardize this forthcoming Gubernatorial Election in Edo State.

“We are equally counting on INEC not to succumb to this false alarm by acting independently and holding election as scheduled.

“We hope that this advice from the security agencies are not in concert with the APC of having seen the indices of losing the Edo State Gubernatorial Election to the PDP,” the statement read.

While the PDP is expressing displeasure over the postponement of the election,  the APC has raised alarm over what it called an alleged plot by the PDP to unleash violence and cause confusion in the state during the governorship election.


The party, which is holding power in the state, claims that the plan would pave way for the opposition to rig the governorship election scheduled for September 10.

A statement by the party said “no less than 500 militants from Delta are being mobilised to critical areas of Edo State to carry out this evil plan using the waterways.

“The primary targets are Edo-North using the River Niger to access areas around Agenebode; Edo-South, via the Osse River; and Edo Central, via Ilushi River”.

Citing internal sources within the PDP, the APC also alleged that the National Youth Service Corps (NYSC) members recruited by the Independent National Electoral Commission (INEC) to participate in the conduct of the elections were being compromised by the PDP with the lure of huge financial rewards should they agree to act out their script to rig the elections.