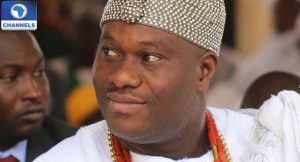 The Ooni of Ile-Ife has called on the Federal Government to intensify investments in culture and tourism, saying the sector is capable of bailing the country out of economic recession.

The Ooni, Oba Adeyeye Ogunwusi, also advised the government to promote Nigeria’s culture, as a unifying force for the people within and in the diaspora.

Ooni Ogunwusi made the request at the unveiling of the Olojo Festival logo, which marked the beginning of the 2016 Olojo Festival, held at the the Ile-Oodua Palace on Friday.

Oba Ogunwusi while launching the logo said: “What we are doing is indeed a new one. We have improved the branding and we want to show the landmark uniqueness of Ile-Ife as a tourist centre.

“Both the government and private entrepreneurs should begin to use tourism for unity and economic development. Tourism is about movement. It is like a mandate that draws people from every part of the world”. 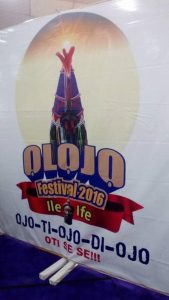 Oba Ogunwusi said embracing culture and tourism would bail Nigeria out of recession, describing it as a lasting solution to the current economic challenges.

The Ooni also mentioned that the sector was capable of making Osun State one of the richest states in Nigeria.

‎While describing Olojo as one festival with world class recognition, he emphasised the fact that ‘the festival draws all sons and daughters from across the world’ and that it would be a good opportunity to reinforce the notion of Ife, as a foremost cultural centre and sensitise them on the need to tap into tourism and culture.

The Director General of the Office of Economic Development and Partnerships (OEDP), Dr. Charles Akinola, who represented the Governor of Osun State, Rauf Aregbesola, said that entrepreneurs involvement was necessary for cultural renaissance and socio-economic development.

Explaining further, he pointed out that Ile-Ife had no less than 12 tourist centres of international standards and also made reference to some other countries who have generated revenue ranging from $20.2 billion to $177.2 billion.

He stated that the government already had a tourism master-plan and had been developing it within the possible financial circumstances.

“When these are developed and well marketed, they will generate jobs in arts and craft; tour guides, transportation services in airlines and taxicabs and hospitality services,” he stated.

Dr Akinola called on entrepreneurs and those interested to partner with the government in order for the nation to benefit from the tourism ‘money-spinner’.

Stressing the importance of this partnership, he explained that culture separates one human group from another.

“Culture is the capsule that houses the economic system, science and technology, behavioural pattern, beliefs and religion of a people.”

He further expressed concern that Nigeria was not tapping into the economic aspect of culture, saying: “We can build a thriving economy around our culture and monuments”.