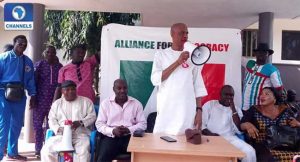 Alliance for Democracy (AD) Candidate in the Ondo State governorship election, Olusola Oke and his deputy, Ganny Dauda, have been presented the flag of the party.

‎The event held at the Democracy Park in Akure, the state capital and was witnessed by leaders of the AD, including its National Leader, Senator Mojisoluwa Akinfenwa, the National Chairman, Joseph Avazi and other top officials of the party.

The National Legal Adviser of the party, Kehinde Aworele, who had been in court to challenge the emergence of Oke and his deputy was also present to tell supporters that there was no more crisis in AD.

“There was a court action based on the misunderstanding on the appropriateness of Chief Olusola Oke’s emergence and because his victory is sure we don’t want some people to go to court after his victory to challenge him.

“The fact that I am here addressing this mammoth crowd today shows that there is no more crisis in the party, no cracks within the party, we are one indivisible party.

“There are several means of getting a case out of court; by abandonment, by withdrawal and by discontinuance. There is no more case in court as we have resolved the issues,” he said.

In his address, the National Leader of AD, Senator Mojisoluwa Akinfenwa described Olusola Oke as the inheritor of the Awolowo mores.

He gave the assurance that when Oke is elected and forms his government, Ondo would have set itself on a path to rise again.

“For 13 years, we have been in the wilderness, now it has pleased God to give us a leader that is capable of putting Ondo back on tracks.

“If you look at the PDP, it is full of crises, people deceive people, they are at each other’s throats. The APC too is not faring better, they are an amalgam of strange bed fellows who cannot deliver on their promises.

“But we are happy today that the party of Papa Obafemi Awolowo, that of Papa Adekunle Ajasin and Papa Adebayo Adefarati is here and I want you all to vote for the AD.

“If you vote for Olusola Oke, he will replicate all those good programmes of old, he will revamp our education, bring back the revival of our agricultural sector, education shall also be brought back to reckoning,” the AD leader assured.

Earlier in his short remarks, the AD National Chairman, Joseph Avazi said that the AD was poised to form the next government given the spontaneous show of love for a party that merely came into reckoning in barely two months.

According to him, a new dawn is now breaking in Ondo State and AD is set to bring back the lost glory of the Sunshine State. We have ruled this state before, this is our second coming and we shall not disappoint you.

In his acceptance speech, Olusola Oke promised that under his watch, Ondo State would be better and the people would thrive under his administration.

“The priority of my government shall be the good of the people of Ondo State. I greet our mothers, we shall ensure we give you life abundance, we shall give you money to trade. Our workers shall receive their salaries and other entitlements as and when due.

“Our youths shall be gainfully employed as we shall wake up all our dead industries and make them functional again.

“I will be in a hurry to deliver good governance, all our dead industries will be completed in a hurry. We shall all laugh and be glad that we voted the best party, the Alliance for Democracy, into power on November 26, 2016, “Olusola Oke assured the cheering crowd.

While further affirming that he would be dedicated to the people’s  welfare, be accountable to them at all times, he pleaded with the people to ensure that they all come out on November 26, 2016 to vote for the Alliance for Democracy.