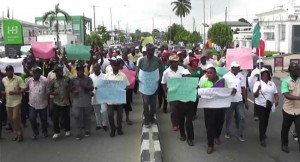 Pensioners in Osun have threatened to shut down the state, if the government fails to pay all their outstanding pension and gratuity.

They stated this during a protest staged in Osogbo, the Osun State Capital.

The pensioners in large number gathered at the former Fakunle High School Osogbo, as early as 7:00 am for a prayer session, before moving to old garage via olaiya/MDS road towards Okefia/Alekuwodo, before they stopped at the olaiya roundabout.

Their protest caused a breakdown in vehicular movement and other activities in the area for more than two hours.

According to the Chairman of the 2011/2012 forum retirees in Osun, Ilesanmi Omoniyi, apart from their gratuities, government is still owing pension arrears of more than 10 months.

He explained the difficulties faced by retirees who are mostly aged, saying “things have not been easy due to the non-payment of their entitlements and more than 1,000 members of the union have lost their lives, while many are bedridden”.

Mr Ilesanmi advocated full payment of their benefits from the state government, having received half payment for more than a year.

He then stressed that the retirees did not deserve non-payment of their benefits having served the state for 35 years.

Referring to the Governor, Rauf Aregbesola, Ilesanmi said “he is owing us ten and half months pension and gratuity between 2008 and 2012”.

“He has placed us on half pension since July 2015 and the half payment is not even regular, so that makes our members to be dying and we’ve lost many of them”.

Furthermore he said, “as i’m talking to you today, one of our members who is a woman from Ipetumodu, died of stroke yesterday”.

The only way to avoid disruption of peace, activities and harmony in the state, is for the state government to pay their dues in no time, Mr Ilesanmi emphasized.

The senior citizens also insisted that the bailout fund given to the state by President Muhammadu Buhari, for the payment of workers salary and pensions, was diverted by the state government.

Also addressing the issue, Mr Yemi Lawal said many of them have been sent out by landlords, while their children are out of school, as it has become difficult to pay their tuition fees.

Some other retirees who spoke to Channels Television, equally lamented the hardship they’ve been going through since they retired from active service.

In reaction to this, a statement by the Director, Bureau of Communications, Media and strategy, Semiu Okanlawon, said:

“As I write this, some are getting alerts for August while some had received since yesterday.

“It does not sound too good that the protest by this group is taking place the very day the pensioners are getting their pay because we know this is not supported by the majority of pensioners in the state.

The statement further read: “Local government and primary school pensioners have been paid up to August 2016, like all workers in the State.

Furthermore, “While we sympathize with our workers and pensioners alike, for not paying up to date, it’s pertinent to state that this is not peculiar to Osun and indeed, Osun has made efforts that should be commended by all, especially in the face of national cash crunch. ” he stressed.

The protest is coming almost three months after the last one that took place when the state marked its 25th year of creation on the 27th of August.

Nigeria Heading For Another Recession, To Recover In 2021 – Buhari