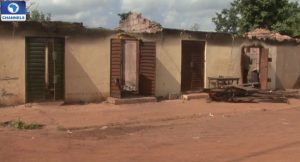 No fewer than 808 people have been killed in the ongoing attacks on communities by suspected armed herdsmen in Southern Kaduna.

This is according to the Catholic Archdiocese of Kafanchan.

In a statement issued by the Vicar General of the diocese, Reverend Father Ibrahim Yakubu, 53 villages have so far been attacked and 57 people injured.

The church also accused government and security agencies of not doing enough to protect the people of the area from being attacked by the armed bandits.

“Unfortunately, our government both at the Centre and State levels have failed woefully”

The church, while demanding for immediate end to attacks in the area and compensation to all families that lost loved ones or property, also called for the establishment of a Commission of Inquiry be put in place to investigate the causes of the crisis.

“We call on Southern Kaduna indigenes to remain steadfast in prayer, united, strong and never to cave in to the antics of our adversaries.

“Tribe and denominational differences shouldn’t put a chasm between us.”