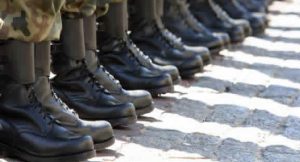 Thirty-eight years after, retired Nigerian soldiers across the country who fought to protect ensure the unity of Nigeria are displeased with the non-payment of their pension by the Federal Government since then.

They lamented what they described as ill-luck which they said had befallen them for almost four decades.

The retired soldiers are embittered that while they who fought for the unity of the country still struggle 38 years after to collect their legitimate pension, their Biafran colleagues who waged war against the country then have been enjoying all their entitlements including their pension.

The ex-soldiers under the leadership of their National Coordinator, Ex-sergeant Kasali Busari, said after series of screenings which had led to the death of many of their colleagues, the government had not paid any of them after verification of their documents and certifying them for payment since November 6, 2015.

According to them, instead of the country to treat them as heroes for the uncommon loyalty they displayed to make the country a united one,”it is rather unfortunate that we are subjected to untold hardship in our old age and our legitimate rights denied us”.

They said, while waiting endlessly for the unpaid pension, some of their colleagues had died when they could not get money to buy drugs prescribed for them to manage their fragile health.

While commending President Muhammadu Buhari and the Vice President, Professor Yemi Osinbajo, the Minister of Defence, Brigadier General Dan Alli (rtd), the Chief of Defence Staff, General Abayomi Gabriel Olonisakin and the AVM, Mohammed Dabo, Chairman, Military Pension Board for helping them to the level of verification and clearance for payment.

They pleaded with them to ensure that the soldiers, who spent less than 15 years in service, get their pension, as they have promised them.

Citing a March 31 1977 decree which qualified them for payment, Ex- Sergeant Busari requested that ”relevant stakeholders should come to our aid and wipe off our tears so the labour of our productive years to this country will not be in vain”.