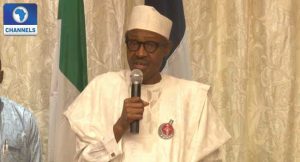 In a statement issued by his spokesman, Mr Femi Adesina, the President recalled the octogenarian’s versatility in issues of culture, language and history, as well as his penchant for research.

He believes that the former Chief Justice, who was also Chairman of the Federal Judicial Service Commission, had already booked an honourable place in the history of Nigeria.

President Buhari prayed that the almighty God would grant Justice Belgore longer life, good health and more prosperous years to continue in the service of his country.

“As a public servant, who variously served as a judge, chief judge (and) justice of the Court of Appeal, before being elevated to the Supreme Court Bench in 1986 from where he reached the pinnacle of his career as Chief Justice of Nigeria, President Buhari believes Justice Belgore’s passion for jurisprudence should continue to inspire the younger generation of lawyers in making the right choices for nation building,” Adesina stated.