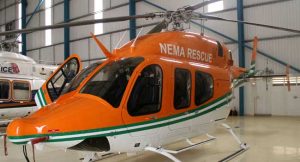 This according to the agency is to join other stakeholders in providing support for emergency operations in the state, following the closure of the Nnamdi Azikiwe International Airport in Abuja, Nigeria’s capital.

A statement issued on Friday by the spokesman for NEMA, Sani Datti, explained that the helicopter would be used for medical patrol, while the MICU ambulances with the Rapid Intervention Vehicles are stationed along Jere and Katari Towns, Kaduna-Abuja road and Kaduna International Airport.

“The MICU ambulances are used to administer first aid treatment and stabilisation for trauma victims on their way to the hospital, as it serves as a mobile hospital with the capacity to carry one critical and one less critical victim.

“The Rapid Intervention Vehicles are used for search and rescue, fight fire rapidly and extrication of victims trapped in accident vehicles or collapsed structures,” he said.

NEMA asked the public to contact it through its North West Zonal office at number 15 Wurno, Road Unguwan Sarki, Kaduna.

The agency said it can also be reached through its emergency call number: 0800CALLNEMA (080022556362) or the National Emergency Number 112, stressing that all calls are toll free.