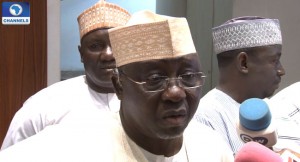 The Nasarawa State Deputy Governor, Silas Agara, has rated Governor Tanko Al-Makura high on governance since the inception of his administration in the year 2011.

Mr Agara stated this in Akwanga Local Government Area, while receiving a delegation from Akun Development Area of the state.

“Everybody in the state has seen what the government of Governor Al-Makura has done since its inception; in fighting poverty, hunger, unemployment, youths and women restiveness, as well as boosting the socio-economic development of the state.

“Apart from transforming the education, agriculture, economic, health, judicial, commercial sector, he has also constructed some reasonable kilometres of roads in each Local Government Area in the state, to boost our transportation system.”

The Deputy Governor further stated that: “the developmental strides of the government under the Tanko Al-Makura administration has improved the standard of living of the people of the state, generated employment as well as boosted the socio-economic development even for the country at large”.

He, therefore, called on stakeholders to continue to pray and support President Muhammadu Buhari and Governor Tanko Al-makura to enable them to succeed.