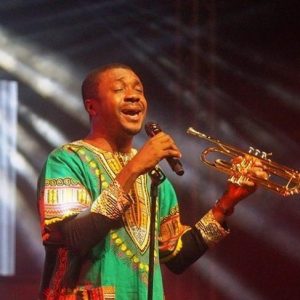 Gospel music act, Nathaniel Bassey’s who led social media challenge tagged the ‘Hallelujah challenge’ has taken the internet by storm with over 70,000 participants joining in a daily midnight music and worship session on Instagram and Facebook.

The Hallelujah Challenge, which is a 30-day midnight livestream session, has not only attracted people from all over the world but also several A-list celebrities, including Tiwa Savage, D’banj, Rita Dominic, Funke Akindele and Don Jazzy. who have joined the campaign, drawing more attention to it.

The participation of the celebrities has in turn drawn more attention to the challenge.

Speaking in an exclusive interview with Entertainment News on Channels Television the singer explained that he was led by the Holy Spirit to conduct the midnight music and worship session.

“It started as an inspiration from God, it was the leading of the holy spirit and that was following up on something we call the “Tongue challenge” which was initially praying for one hour every month,” he said.

Bassey expressed his excitement over the eagerness of people to participate in the ‘Hallelujah challenge’.

“The number of people joining the challenge keeps rising on a daily basis, the last session had over 70,000 people and that’s not including the over 90,000 who joined via Facebook,” he said.

Beyond attracting participants, the challenge has courted criticism.

Some critics say it is just another fancy hangout for celebrities.

But Bassey is not bothered by the thought.

“There is absolutely nothing on earth that is without criticism, anything that has greatness on it must be criticised and more so the gospel has always been opened to criticism,” he said.

Speaking on what’s next after the 30 days Hallelujah Challenge, he said, “once the challenge is over we will go ahead with our stuff and keep recording and singing my song and inspiring my generation, we will just be hopeful and see what happens next.”
The Hallelujah Challenge worship and prayer livestream session started on Instagram Live June 1st.