Amid growing concern about the negative impact of the gridlock in Apapa on the nation’s economy, Senate President Bukola Saraki has called for a permanent solution.

Years of complaint by motorists, importers, and private sector players about the gridlock in Apapa, where the country’s biggest and most functional ports are located, has not led to a significant improvement in the situation.

Now, the Senate President believes it is up to the Senate to find the much-sought solution to the problem.

He arrived at the conclusion after an inspection of the roads in Apapa.

In a Facebook post on Monday, Saraki said, “After meeting, at the weekend, with a delegation of members of the private sector who complained to me about the high cost of getting goods out of the Apapa ports, due to the perpetual gridlock on the Apapa Port Road and other roads around the area, I conducted an aerial inspection of the roads this morning.

“It is clear, that the Senate must find a prompt and permanent solution to the problem. We must put in place an arrangement that is less cumbersome and not bogged down by bureaucracy. The arrangement must also include the participation of the private sector.” 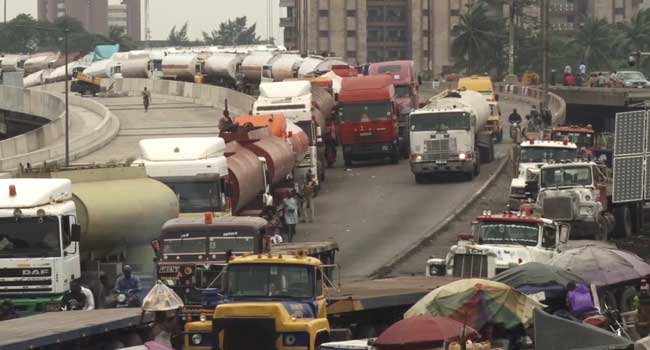 The Senate President did not provide any details about how the Senate would go about finding the solution to the problem or what options it would consider.

His comments come just days after the Lagos State government announced a restriction on trucks and tankers that lift products from the ports or that operate in the area.

Specifically, the state government asked owners of articulated vehicles, trailers, and petroleum tankers to keep their vehicles away from the Apapa area of the city and its environs until it is able to find a solution to the unending traffic bottleneck.

The Acting Commissioner of Transportation in the state, Mr Olanrewaju Elegushi, in a statement announcing the restriction, explained that the directive would be enforced to eliminate the current hardship motorists face on the road every day.

According to him, the gridlock is worsened by the current rehabilitation of some major roads and other minor ones which necessitated the closure of some roads in Apapa.

COVID-19: Seaports In Lagos To Remain Operational As City Goes On Lock Down

Gridlock As Vehicle Burns On Kara Bridge Along Lagos-Ibadan Expressway