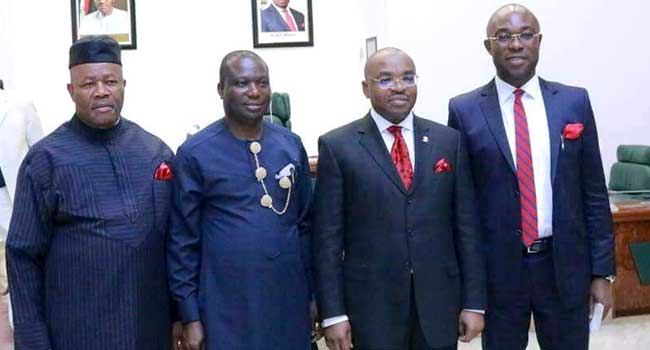 Mr Ibanga Akpabio is the Commissioner for Ministry of Labour, Productivity and Manpower Planning, while Professor Victor Inoka is assigned the Ministry of Education to replace Pastor Paul Udofia.

At the swearing-in ceremony which took place on Wednesday at the Government House in Uyo, Governor Emmanuel who said the new commissioners came highly recommended was hopeful that they would add value to the Council.

He said: “We have added to our team, two fresh ideas and brains. I have added two more to the family, so beat that if you can in terms of pedigree, intellect, exposure, passion, tenacity in delivery, and even in capacity. I believe we will get the best out of these two.”

The governor further thanked the serving commissioners for the contributions they have made so far to the state government and urged them not to relent in their selfless services.

He also advised the new commissioners to be mindful of their conducts as they are now seen as representatives of the government.

Governor Emmanuel asked them to take their duty to heart, discharging same without the interference of personal interest.

Addressing reporters shortly after his inauguration, Professor Inoka, described the governor as a visionary man who is assiduously working towards building a bridge to link the state to the future.

He thanked Emmanuel for the appointment and promised to key into the governor’s vision with a show of unflinching loyalty, dedication and commitment to his duties.

Akpabio hails from Essien Udim Local Government Area of the state and until his appointment, he served as the State Deputy Chairman of PDP, while Inoka from the University of Port Harcourt is a native of Oruk Anam Local Government.

Apart from Pastor Udofia who was relieved of his appointment, all other commissioners and special advisers retained their posts.

Present at the swearing in were some present and past leader in the state, including the immediate past governor and Senate Minority Leader, Senator Godswill Akpabio.