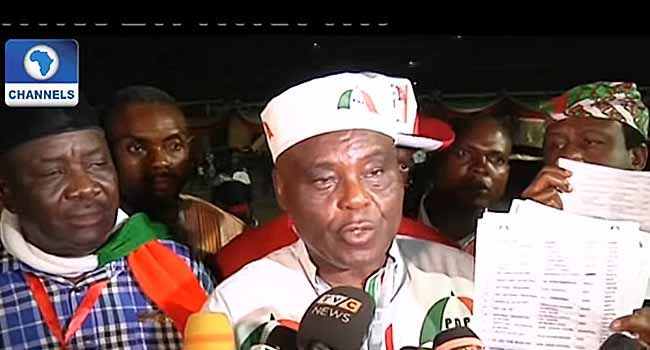 Founder of Daar Communications, Raymond Dokpesi, has expressed disappointment over the emergence of a list called the ‘Unity List’ in the National Chairmanship Convention of the Peoples Democratic Party (PDP).

The list, a copy of which was obtained by Channels Television on Saturday, contained the names of purported ‘unity candidates’ identified for delegates to vote, a development which Dokpesi and another contestant, Professor Tunde Adeniran said amounted to rigging.

Speaking to reporters at the Eagles Square in Abuja on Saturday, Mr Dokpesi also alleged that the names on the list were those who won various seats in the party’s leadership structure.

“Our attention has just been drawn to an impunity and illegality that has been going on since we started voting about three hours ago.

“Apparently, every delegate that is available a copy of what you can find here, they call it the Unity List (raises copy of ‘Unity List’), which bear the same thing and all the names that are here are number 1 on all the cubicles for voting and this is supposed to be the list prepared by the governors.

“Our agents have been very disturbed. Everybody has come out to vote, has this list.”

He, however, noted that although he was not angered by the situation, he just wanted the press as well as observers to see that the process was not free and fair as claimed.

According to him, he had reported the case to the Chairman of the electoral committee, Mr Gabriel Suswam, as well as the chairman of the planning committee Governor Ifeanyi Okowa, but both seemed equally overwhelmed by the situation.

“I have personally approached governor Suswan who is involved in the management of this electoral process and he told me that he was taking necessary steps and that he personally even collected this Unity List from a governor.

“I approached governor Okowa who is chairman of the planning committee – he too is helpless so the names you have here is not unlikely to be what you will find announced later today.

“But unfortunately I am not pained, I am not angered, but the younger ones that are involved have come up with cries to me and I must take an appropriate step.

“Distinguished ladies and men of the press, the purpose of just drawing your attention and showing you this – collected from various delegates is to show very clearly that the process that is going on is very seriously marred,” Dokpesi stressed.