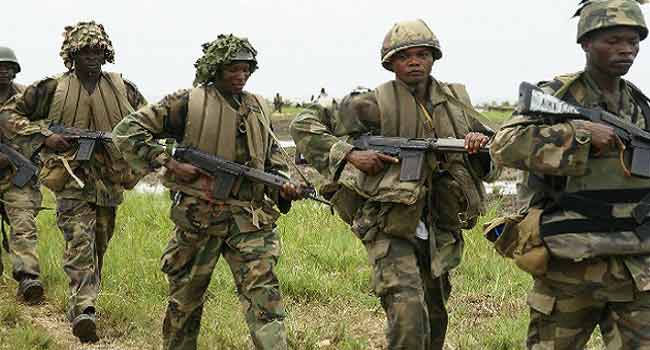 Troops of the Operation Lafiya Dole on Friday, neutralised remnants of the Boko Haram Terrorists in Sambisa forest and other parts of Northern Borno State.

Under the Operation Deep Punch (II), the troops with effective support from the Nigerian Air Force also destroyed equipment and make-shift accommodation around the Camp Zairo, Improvised Explosives Device (IEDs), booby traps and other devices.

This was disclosed in a statement signed by the Director Army Public Relations, Brigadier General Sani Kukasheka Usman.

According to the statement, the troops also neutralised seven Boko Haram terrorists and wounded several others.

Impressed with the development, the Commander Sector 1 Operation LAFIYA DOLE, who is also the General Officer Commanding (GOC) 7 Division, Major General IM Yusuf, visited the troops harbour location and encouraged them to sustain the tempo of the offensive until they have eliminated all the Boko Haram terrorists wherever they might be hibernating.

Two soldiers were, however, wounded during the encounter but have since been evacuated by the Nigerian Air Force and are responding to treatment, the statement added.