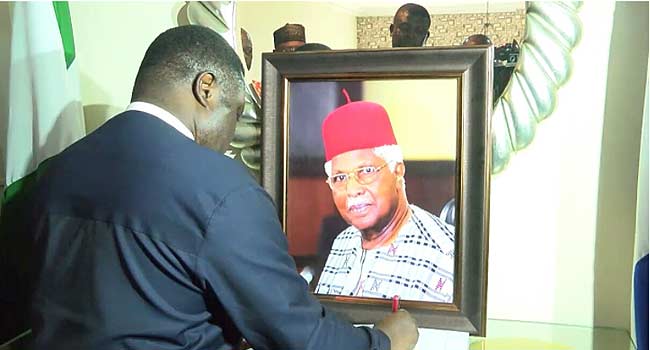 The Cross River State Governor, Professor Ben Ayade, has paid tribute to the former Vice President of Nigeria, Dr Alex Ekwueme, as the nation prepares to give the late icon a befitting burial.

Signing a condolence register opened at the government house in Calabar the Cross River State capital, Ayade described the late Vice President as a selfless political leader who through his lifetime contributed greatly to the development of the country. 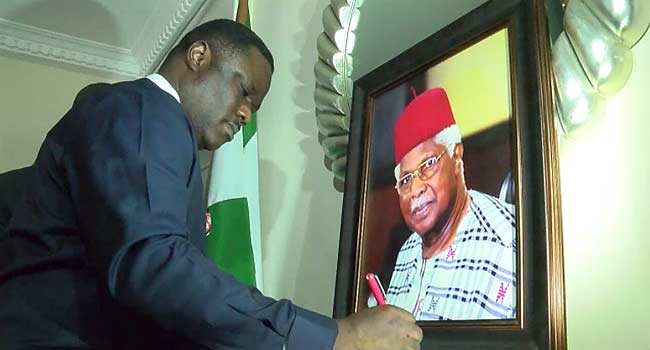 In his tribute, Ayade wrote, May the mighty and worthy character and ethics continue to glow and take Nigeria to the dream of the people.

He urged political office holders to emulate the steering virtues of the deceased to make a difference in governance.

The former Vice President died on Sunday, November 19, 2017 at a London hospital.

He was flown to London for medical treatment after he was reported to have suffered a chest infection which left him in a coma in a hospital for two weeks.

Born October 21, 1932,  Ekwueme started his career as an architect after earning a bachelor’s degree in architecture and city planning, as an awardee of the Fulbright Scholarship, from the University of  Washington in the United States.

He later obtained a master’s degree in urban planning and also earned degrees in sociology, history, philosophy and law from the University of London.

He also obtained a PhD in Architecture from the University of Strathclyde, before gaining the BL (honours) degree from the Nigerian Law School.

In 1979, Ekwueme became Nigeria’s first Vice President, serving as deputy to Shehu Shagari, until 1983 when they were ousted in a coup.

Over the years, he has played several roles domestically and internationally, cementing his status as a statesman.