He also immediately announced Director of CIA, Mike Pompeo as the successor.

“Mike Pompeo, Director of the CIA, will become our new Secretary of State. He will do a fantastic job!

“Thank you to Rex Tillerson for his service!” Trump tweeted.

While details of the sack are not made available by the President, he had also announced the appointment of Gina Haspel as the head the Central Intelligence Agency — the first woman tapped for the post.

The news of the shocking sack is coming a day after Tillerson visited Nigeria.

Tillerson was received at the presidential villa in Abuja on Monday by President Muhammadu Buhari.

Tillerson in his maiden tour of Africa had also visited Ethiopia, Djibouti and Kenya since last Wednesday. 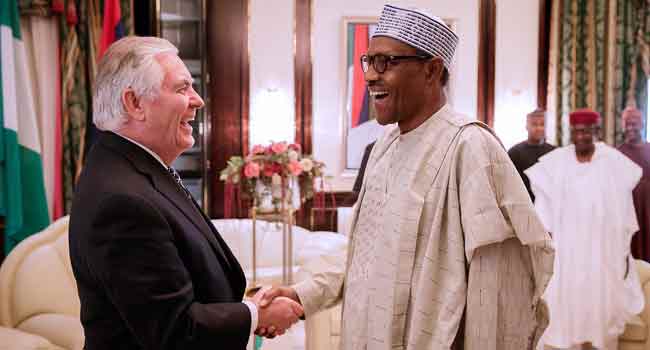 President Donald Trump after announcing the departure of his top diplomat Rex Tillerson said the current CIA Chief Mike Pompeo will replace him.

He praised Pompeo, a former US army officer and congressman who led the CIA for nearly 14 months, as “the right person for the job at this critical juncture.”

“He will continue our program of restoring America’s standing in the world, strengthening our alliances, confronting our adversaries, and seeking the denuclearization of the Korean Peninsula,” Trump added.

The reshuffle comes days after the spectacular announcement of a meeting between Trump and North Korean leader Kim Jong Un, whose date and details have yet to be determined.

Trump called for Pompeo to be swiftly confirmed in the role — as his administration heads into the high-stakes talks.

He had scant words of praise for Tillerson, who was travelling in Africa when Trump made the snap decision last week to accept an invitation to meet Kim.

After the announcement, Tillerson suspended his schedule on grounds he was “unwell” and eventually cut short his trip to fly back to Washington.

“I want to thank Rex Tillerson for his service,” Trump said. “A great deal has been accomplished over the last fourteen months, and I wish him and his family well.”

The former Exxon CEO has had a rocky tenure as the top US diplomat and had long been rumoured to be about to be pushed out.

Tillerson was repeatedly forced to deny he had fallen out with Trump — vowing to remain in post despite a sensational report that he once dubbed the president a “moron.”

A respected figure in the oil business, the 65-year-old Texan’s tenure at the State Department drew scorn from Trump’s opponents, from former diplomats and from the Washington policy elite.

During his time in post, he was faced with an extraordinary array of foreign policy challenges, from North Korean nuclear threats to Russian subversion to attacks on US diplomats in Cuba.

But his efforts were often overshadowed by Trump’s un-diplomatic style and his streams of taunting tweets stirring international tensions.

‘That Can’t Be Me’: Ihedioha Denies Calling Obi Supporters Saboteurs

Everyone Wants Me To Run In 2024, Says Trump