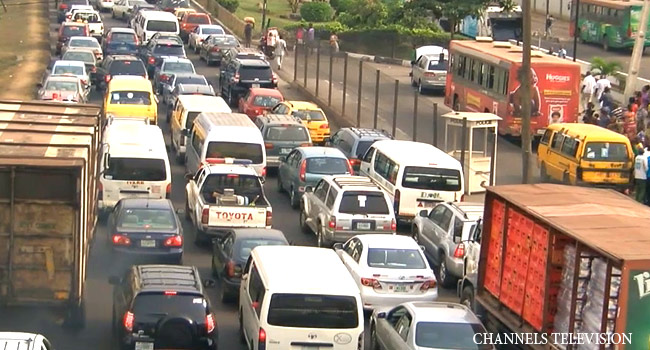 Lagos residents, on Thursday morning, took to social media to narrate their ordeal in the traffic gridlock which gripped the state in the wake of preparations for President Muhammadu Buhari’s visit.

The gridlock according to the residents started from Wednesday night as Lagosians hurriedly went about the daily activities sequel to the work-free day declared by the state government.

The Lagos State Commissioner for Information and Strategy, Kehinde Bamigbetan, had announced on Tuesday that declaring Thursday a work-free day to enable residents to come out and welcome the President when he arrives.

Also in line with the President’s visit today, March 29 and tomorrow March 30, the Lagos government announced that movement will be restricted to certain areas but alternative routes will be provided.

Many residents who were stuck in traffic on Thursday morning due to the restriction of movement were left with no other option but to trek to their workplace.

Expressing anger at the disruption caused by the gridlock, residents took to social media to share pictures and short videos showing them trekking to their workplace. Others shared pictures of the traffic congestion, fuming and lamenting over increased transport fares.

See the images and reactions below…

Lagos DON’T DO IT. Absolutely avoid VI of you can today. Entering via Bonny Camp thru CMS is a no. You are diverted inside Lagos Island. Many side roads close to Eko hotel are closed. Drove around for 20 minutes trying to get to my office @Gidi_Traffic

If you have business in Ikeja and have not left the house. Don’t bother. All access roads to the airport have been blocked. Mad traffic.

@Gidi_Traffic What’s the verdict for those still stuck on the road, this early? Everyone be eating their lunch in traffic already😩😩😩 pic.twitter.com/pTX0wDPKgN

President Buhari is coming to Lagos. The best advice is to stay in your house because of traffic.

This Country is something else. I just can’t wait to put Ex- Nigerian in my Bio.

“@lucanmaik: Lagosians being made to pay the price as a result of President’s visit. If you have to use IKEJA – CEMENT – and IYANA IPAJA route and it’s not a life and death situation, please stay at home. #PMBinLagos @Gidi_Traffic #GIDITRAFFIC pic.twitter.com/juc5olSPYN

“@OladapoAwobeku: All these Lagosians have to trek all the way!

This isn’t good governance!
This isn’t what #Nigerians voted for!!!
All because one man @MBuhari
Is coming to town! #PMBinLagos#GIDITRAFFIC #Buhari @Gidi_Traffic pic.twitter.com/tIyRMLC4VD

#PMBinLagos let keep trekking, their is nothing we can do, in nigeria anything the government has said is final. Nobody can change that. Buhari come o we are waiting.

People are literally walking to work all because #PMBinLagos

Even those of us that got bus, the fare increased. #PMBinLagos

No time duration was indicated for the road block, no alternatives. Yeah, just block off the roads. We’ll fly about on our brooms. Mtcheew. #PMBinLagos

@followlastma Dear Lagosian, bear in mind that u may have tough traffic situation today. If U must go out, make sure U wear comfortable sandals and have an extra slippas incase. ‘Cos you will be embarking on an endurance trek today. @MBuhari @Gidi_Traffic #PMBInLagos pic.twitter.com/bmurbQSybR

President Buhari is expected to commission the new Ikeja Bus Terminal, attend a colloquium in honour of the national leader of All Progressives Congress (APC), Bola Tinubu, and also embark on a tour of the Eko Atlantic City, among other activities.

Ramadan Is A Time For Higher Virtues Of Love, Kindness And Generosity – Osinbajo